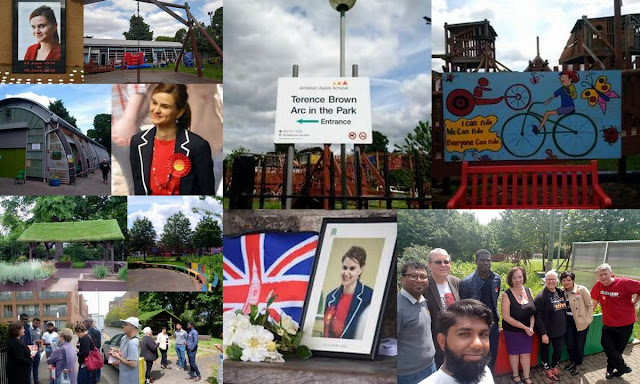 A lot has happened since Sunday, when UK political parties suspended General Election campaigning for one hour in order to remember murdered young mum and MP, Jo Cox, and to visit community projects. In West Ham we stopped campaigning and visited the "Arc in the Park" project in Canning Town with our Labour Parliamentary candidate, Lyn Brown. This is now run by the charity called AAA (Ambition, Aspire, Achieve).

AAA supports disabled children and young people as well as their families. Despite cuts in Council funding the charity still provides much needed respite and support. We were given a guided tour of the sensory garden and play area by staff who were so, so proud of what they do.

After the visit many of us went back to campaign for Labour in Forest Gate.

I am so proud to live in a country that despite significant problems of inequality and unfairness, unites against fascism in all its forms and has so many people, like Jo Cox, the staff at AAA, the emergency workers in Manchester, who have dedicated their lives to the public service of others.
Posted by John Gray at Thursday, May 25, 2017