West Hammers at Home and Away (Ilford North) 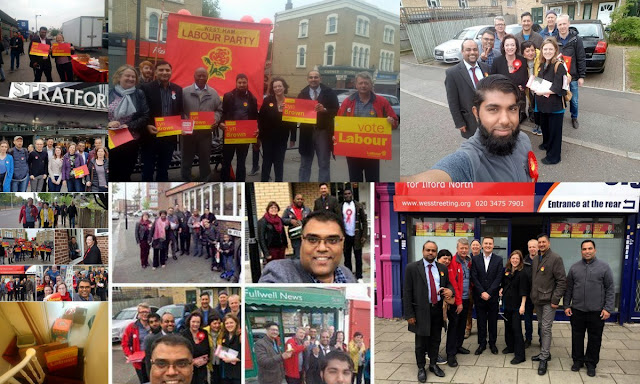 Picture collage from yesterday's (Saturday) Labour campaigning in West Ham and Ilford North. In the morning we had street stalls in in Forest Gate and Canning Town, as well as canvass teams in Plaistow North, Plaistow South and Custom House.

Our West Ham Labour Parliamentary candidate,  Lyn Brown, was there to support the stalls and canvass teams.

I helped organise the Forest Gate stall. We handing out balloons and leaflets on Labour Housing plans for real "affordable" homes to rent or buy. This is a key issue in West Ham where property prices and rents are ridiculously high and completely unaffordable.

We need to get the message out that the Labour Party commits to building one million houses (half Council homes), controlling rent rises and regulating all landlords if elected.

The stall went well as you can expect in such a strong Labour area even though there was a couple of people who thought that shouting insults as they walked by constituted political debate. The best response to this is to politely thank them for expressing their views.

In the afternoon a number of West Hammers with Lyn Brown went to canvass in the marginal Ilford North. Others went to Westminster North and Croydon.

By coincidence my West Ham team was sent to Fulwell Avenue in Barkingside. My wife, Gill, is a Barkingside girl, born and bred, who was brought up in Fullwell Avenue. I can remember this area then being strongly Jewish, many of whom had originally moved here from Tower Hamlets and Newham. Now the Jewish diaspora has inpart moved on and been replaced by a new wave of East End immigration.

There was very strong Labour and local support for our candidate, Wes Streeting. Residents who admitted they were not natural Labour voters, agreed that Wes had done a good job as their MP and they would be supporting him.

At the end of the canvass (warning this is a long up and then down route) we enjoyed ice creams and lolly ices (see photo "Fulwell News").  Result!