25 Days until UK General Election: On the knocker in Forest Gate & Ilford North 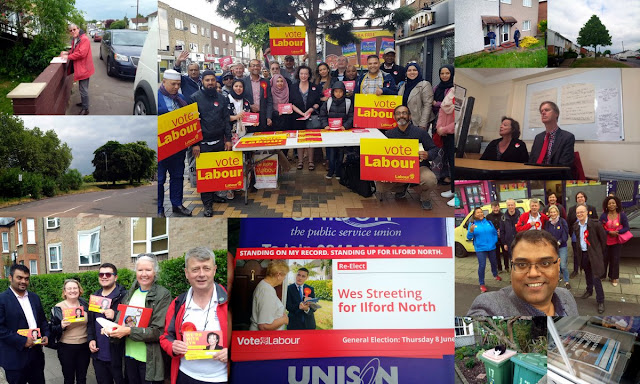 Yesterday started with my Newham Councillor surgery in Vicarage Lane Community Centre, West Ham. A constituent came to see me about a pretty appalling disrepair case in a Housing Association shared ownership block. I have been in touch already about this case and have written to the association asking for a site visit with an officer and a surveyor to do a  joint visit.

Another constituent came to see me about Newham Council organising a sports competition between a team representing the Commonwealth and another for the rest of the world. Which is an ambitious aspiration but not one, alas, that back bench local Councillors will have much influence over.

After the surgery I met up with Forest Gate North activists for a Labour doorstep session. We started door knocking in Curwen Avenue, E7, where I used to live many years ago.

I had some interesting political conversations on the doorstep, especially on Brexit and the future of the Labour Party. Forest Gate, on the whole, is very pro "Remain". More than one person was supportive of our Candidate, Lyn Brown, for voting against the triggering of Article 50 but very critical of the poorly supported official Labour campaign in Newham for "Remain". I had to agree and point out that this was despite her best efforts and other Newham Labour Remain supporters. The blame for the poor local result lies elsewhere in Newham.

Our candidate, Lyn Brown, this morning was at a well supported stall at Green Street and and had a number of community meetings including one with local East European residents and East Ham Labour candidate, Stephen Timms.

In the afternoon I went to Ilford North marginal which has a super friendly and efficient campaign office. If you have never been canvassing before I would recommend you go there. They will explain what you have to do and what are the key issues and make sure you are sent out with a supportive team leader.

Meeting 12a High View Parade, Woodford Av, IG4 5EP (a 12 min walk from Gants Hill stn on the Central Line - exit 1). Turn up and say you're from West Ham (and they'll look after you if you haven't campaigned before).

In Ilford North I came across some evidence of UKIP and Conservative switchers to Labour. Including one former Tory supporter, whose husband is suffering from dementia and who told me in great detail how much she now "hated" the Conservatives for the lack of support for her husband and the cutting of his benefits.

The Labour candidate, Wes Streeting,  was widely respected as a hard working Constituency MP and supported by residents who will normally vote for another Party in local elections.

By one of those strange coincidences, this morning I was canvassing with Joshua Garfield in Forest Gate and this afternoon with his Mum, former Newham Councillor, Judith Garfield, in Ilford North. Both of them are expert canvassers. Must be in the blood.