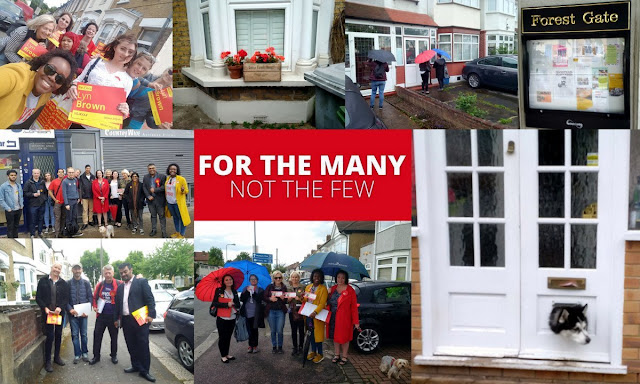 Yesterday morning I started off campaigning in Forest Gate North with local Councillor, Anamul Islam and activists. It was also the first time that my wife, Gill, had actually knocked on doors and spoke to residents about supporting Labour.

It was the usual, rock solid and humbling Labour vote in Forest Gate.

The weather held out during the morning but on route to Ilford North to support marginal Labour Candidate, Wes Streeting,  there was a torrential downpour, which set the scene for the rest of the day.

West Ham Labour activists met up with our candidate, Lyn Brown, at the Ilford North HQ. Lyn had been out that morning with a number of different groups including West Ham Labour Women's Forum (see picture collage top left) who also turned up for afternoon Ilford North session led by the one and only, Cllr Seyi Akiwowo.

During the canvass in Ilford North the weather was on the whole a little wet but I think electors are impressed with canvassers who turn up to meet them and listen to their views regardless of the weather.

I got a shock while door knocking on at one home. I could see a dog's nose sticking out of a cat flap in a front door that Cllr Seyi had sent me to canvass. I thought nothing of it but when I knocked on the door the dog started barking violently and then stuck its whole head out of the cat flap! For a moment I thought it was coming out to get me and I jumped backward very quickly, much to the amusement of the team (see the wolf - bottom right).

Apart from that it was a largely positive canvass for Wes, with many residents saying they will support him due because he is a very good and active constituency MP.
Posted by John Gray at Sunday, May 21, 2017