Re-elected to UNISON NEC for a 4th term 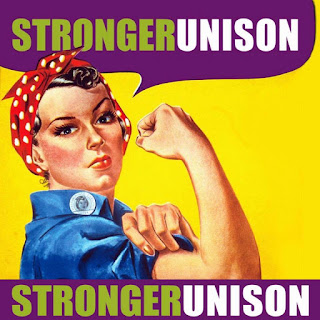 I was really pleased to get confirmation on Tuesday that I had been re-elected unopposed as the UNISON Community representative on our National Executive Council (General seat) for a 4th two year term of office.

I did think that I had an opponent again this time but for whatever reason this didn't happen. I am surprised that I haven't so far come across any deranged conspiracy theories on why this was so but no doubt this will turn up somewhere.

The election results for our NEC this year was mixed and we have lost (in my view) some fantastic activists who were not elected and will be sorely missed but also some outstanding successes.

The long and the short of it, is that the forces of light and reason (in my view) still have a clear majority of seats on the UNISON NEC.

I am also sure that many of those, who for various reasons, were not part of my particular preferred slate this time, will want to work collectively to build, grow and support our union.

Some of those will not but such is life.

I am really appalled at the low turnout of members in this election. I know that this is not just a UNISON problem and other unions have similar awful turnouts in their internal elections. Tory anti-trade union legislation makes it really difficult but I think all of us need to think about how we can encourage member participation in all future elections.

I have some thoughts which I will share another time.
Posted by John Gray at Wednesday, May 24, 2017