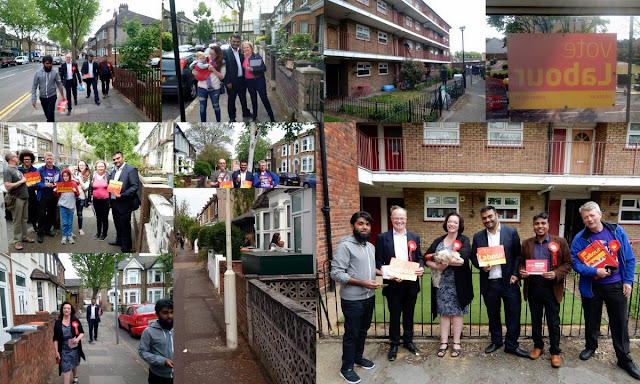 Yesterday I was pounding the mean streets of Forest Gate North again with a team led by local Councillor, Anamul Islam. We were joined by a very young pioneer (10 months?) and her Mum, who had never been out canvassing before. By the end of the session, both were happy to be knocking on doors and the mum speaking to residents about Labour and the General election.

We carried on with the competition from yesterday on who can persuade the most supporters we find to accept "Vote Labour" posters to put on their windows.

Forest Gate North member, Stuart, won with 10 posters handed out despite some outrageous cheating (he has threatened to report me to the Labour Party Compliance Unit unless I withdraw this slur against him. Which of course, I will not)

In the afternoon I joined our MP, Lyn Brown, in Plaistow South. Some parts of this ward used to be a BNP stronghold but now it is pretty solid Labour. A former well known BNP activist we called upon claimed he was "undecided".

Teams from West Ham were also yesterday and today in Ilford North and Westminster North (and other marginals). We will be trying to organise our 2000 West Ham CLP members (and affiliates) to campaign locally and in key marginals.