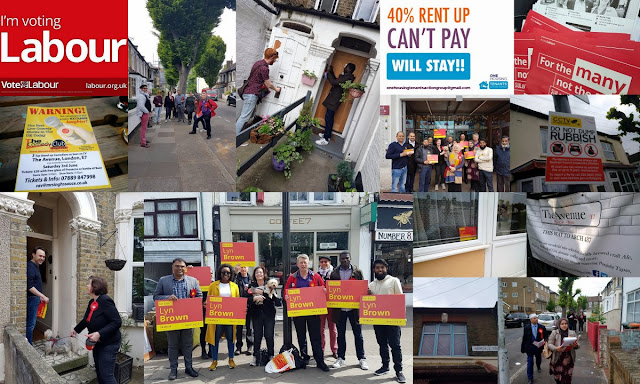 College is from Sundays morning canvass in Green Street West and the afternoon session in Forest Gate North. Our Parliamentary candidate, Lyn Brown, was there to support us with Cara, her famous Yorkshire terrier Labour attack dog.

We first met outside the new East Shopping centre. There was enough activists for 3 separate canvass teams. It was good to see a number of young people participating. Elsewhere, West Ham Labour Party members were campaigning at Ilford North, Croydon and Westminster North.  .

We went to Ferndale Road and along St Georges Avenue E7.  What was interesting (to me) is that most of these terrace houses had a gargoyle (or Grotesque) just below the roof. It appears to be a medieval King's head with a beard and crown. No-one knew why they were there or who it was supposed to be but thought it was probably intended to be an image of St George.

There was very strong Labour support and goodwill towards Lyn. The issues I came across on the doorstep were largely local. Litter, fly tipping, anti-social behaviour, suggestion of knocking down underused garages to build homes.  The session finished with an "off the cuff" general discussion on the street with Lyn, local residents and ward councillors on how to improve the area.

Afterwards I had to go home and print off canvass sheets for the afternoon canvass in Forest Gate. Again, other West Ham activists were at the marginal seats.

This was another successful doorknock in a solid Labour area but this time more challenging questions and comments about national issues.  We had to send people back to look for Lyn who was often tied up in friendly but intense debates on Labour policies and priorities.

It was good to see new members turn up who have never been canvassing before. What you do is you pair new canvassers with more experienced ones until they feel comfortable to knock on doors by themselves. At this point in the campaign the aim is to identify the Labour vote and encourage them to vote in the election. On the canvass sheet residents, who are also Labour Party members are identified and it is simply astonishing how many members there are now.

Top team canvasser again was Stuart who "persuaded" (compliance unit please be aware) 10 households to take a "re-elect Lyn Brown" poster to put on their window.

After the canvass we went for a relaxing outdoor drink (and food)  in "The Avenue".