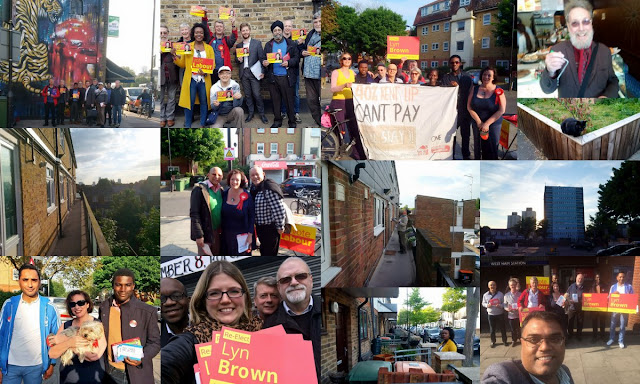 Picture collage from canvass in Forest Gate North on Tuesday evening, West Ham ward on Wednesday evening and a Labour stall outside the busy West Ham Station tonight (which is confusingly not in West Ham ward but Canning Town North).

While we are campaigning everyday in West Ham to re-elect Lyn Brown as our MP, our activists are also pounding the streets and taking part in the telecanvassing of marginals across London.

I led the Forest Gate North canvass team and at first we had the usual problem of trying to get any contacts with electors, who live above shops in the main high street. It must be a nightmare being a local postie with so many addresses having no letter boxes or number identification.

Most of other homes we knocked at were low rise Council housing blocks. Going up and down communal stairs is great exercise. Who needs to join an expensive gym to get fit if you are a Labour Party activist?

The canvass at West Ham ward started outside the wonderful "tiger" street art mural in Holbrook Road, E15 (see top left of collage). I am a local Councillor in the ward. The support that Lyn and the Labour Party gets in the ward is humbling. Lyn in particular got support on the canvass from voters who do not normally vote for the Labour Party but will for her, since they think she is a very good constituency Member of Parliament.

It is not all sweetness and light. I met up with a resident, who I have come across canvassing a number of times, but for a change, this time she was polite and so therefore was I, however, she is a definite A for "Against" on our canvass returns. Not that she ever votes according to the marked register. Which to me - is a shame that she moans bitterly but does not bother to vote against us.

Our street stall outside West Ham Station (which is in Canning Town North) this evening with our Parliamentary candidate, Lyn Brown, (and Cara, her famous Yorkshire Terrier Labour attack dog) was nice, relaxed and took place in warm, balmy, spring sunshine. A number of residents rushing home from the station, (not a really huge number but not insignificant either) were really pleased that Lyn was there to speak to them and talk about their local and national concerns.

By coincidence, we were right next to One Housing Group (OHG) Key workers scheme that I and other Councillors have been supporting against huge rent rises. A number of these tenants, came up to Lyn, to thank her for her letter to OHG and her support over their campaign against the proposed 40% rise in their rents, which has now thankfully been put on hold pending talks.

I had to leave a little early and go off to a School Governors meeting.

As an election agent it has been a good week in West Ham so far (touch wood). Excellent canvass returns across the  CLP. Nomination papers accepted. 2nd Labour Freepost leaflet looking good and ready to be submitted by deadline tomorrow (touching wood, fingers and toes crossed, will be buying white heather).