Far From the Western Front: South Asian Stories of the First World War 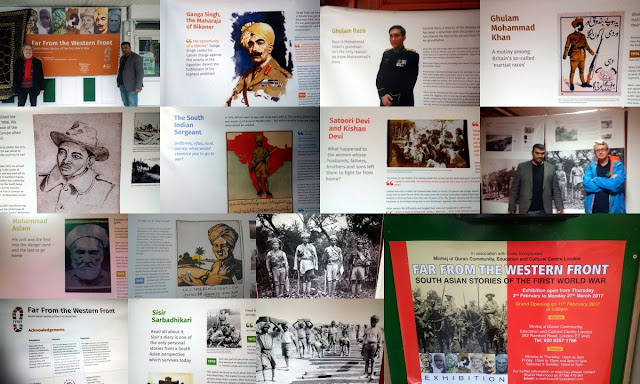 After a Labour Party canvass session in Forest Gate last month, Councillor Anam Islam took Councillor John Whitworth and I to this exhibition in the Minhaj-Ul-Quran Cultural centre in Romford Road.

This was a fascinating examination of the untold contribution made by South Asian troops to the British victory in the first world war and the hardship and ill treatment that many of them received while doing their bit for King and Empire.

The sacrifice and bravery of so many South Asian troops in the deadly trench battles in France and Belgium is beginning to be recognised but many also served and suffered in difficult, unhealthy and at times, murderous campaigns in Gallipoli, the Middle East and Africa.

This is a story not only about those who "volunteered" to be soldiers (instead of sometimes facing starvation and poverty if they remained at home) but about the impact of separation on their wives and children.

The brutality of war and colonial rule is made clear. I for one was not aware that 47 Muslim Indian troops were publically executed by British firing squads at Singapore in 1915 following a bloody anti-colonial mutiny.

But there is no doubt I think that the contribution of South Asian troops to victory in 1918 (and also 1945) is immeasurable. We owe all of them our thanks and respect.

This story is also somewhat personal to me. My maternal Grandfather, fought alongside South Asian troops in Gallipoli and later in the European trenches. . Whatever the rights and many wrongs of the First World War, I think we have to understand and honour all of those who took part. I thank the organisers of this exhibition for educating me and reminding us of a previously untold history.
Posted by John Gray at Saturday, April 08, 2017