"Why I care so much about housing associations: they will be critical to delivering Jeremy Corbyn’s housebuilding target" 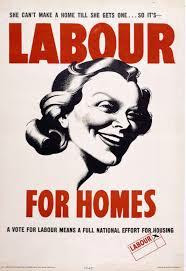 Today John Healey MP announced a welcome commitment to build a million homes if a Labour Government is elected on June 8.

We have to bang the Labour drum on safe, secure, decent and affordable housing for all.

Steve Hilditch on "Redbrick" is really interesting and thought provoking.


"While Boris Johnson mutters inanely about mugwumps, Jeremy Corbyn has tried hard to raise the housing issue in the election over the last couple of days and has started to trail Labour’s manifesto commitment to build a million homes.
Despite the media fascination with Johnson’s clowning, I think Jeremy’s core point – Labour will build more homes and more social rented homes – has come across well.  It was good to see his real passion for the subject during his visit to Harlow today.
It seems any debate about housing during elections – the same happened in 2010 and 2015 – is dogged by deliberate obfuscation about what is being discussed. At PMQs on Wednesday, Corbyn’s question to Theresa May was met by the well-rehearsed stock answer that Cameron delivered so many times before – the Tories have built more council houses than Labour did when it was in office.
It happens to be true, but what does it tell us? It tells us that the Labour Government didn’t want councils to be major builders – it’s one of my main beefs with Labour during the Government years. Instead, the money was put into housing associations to provide social rented housing and shared ownership. Mrs May never addresses that. The only comparison that matters between the two governments is how many homes for social rent were provided by councils AND housing associations together. Here the Labour Government wins hands down and many times over.
Sadly, the same confusion dogged the interview at lunchtime between Andrew Neil and Jack Dromey on the Daily Politics. Neil is just about the only interviewer who asks intelligent questions about housing because he has bothered to look up the figures and learn the difference between starts and completions. But even Neil compared apples and bananas in his questions. Mr Corbyn, he said, has committed to 500,000 new council and housing association homes over a Parliament but the only evidence we have to go on is Labour’s record in office. And then, the switch – he quoted the figures for council homes only. And he repeated the point a few times – the Tories build more council houses than Labour, so why should we believe Corbyn’s commitment?  And that was followed by another confusion, as Sayeeda Warsi started quoting housebuilding figures for the UK while Neil was talking England (or was it England and Wales?).
The viewer sadly must be left completely bewildered, and I hope Andrew Neil will return to the issue again.
Fortunately, Jeremy Corbyn managed to be very clear in his speech in Harlow that the commitment is to build 500,000 new council and housing association homes over the next Parliament. I know it’s a mouthful, but truncating the commitment to ‘council houses’ removes the meaning. Most people involved with housebuilding know that it would be virtually impossible to reach a target of completing 100,000 council homes a year even by the end of the Parliament, and certainly impossible to do it each year starting this year. Even if the resources and borrowing powers were available, it would take several years to gear up, to assemble the land, design the schemes, procure the building contracts, and get started on site. It would be a very good thing to do, but it would not produce the homes fast enough.
So, meeting Labour’s target will be dependent on getting housing associations to provide the homes. They are in a much stronger position than councils to accelerate housebuilding and have a track record of being able to produce homes for social rent and for shared ownership. To meet the target, councils will need to be the planners and the strategists and housing associations will need to be the primary deliverers.
As readers will be aware, I have my criticisms of housing associations. But if a new Labour Government had a clear direction and policy, and made the resources and powers available, I believe housing associations would respond. Most will do so with great enthusiasm, but even those associations who (shall we say) aren’t keen ‘to do social rent’ anymore would follow the money.
John Healey has also been all across the media promoting Labour’s message and has published his new report on Housing Innovations being undertaken by Labour Councils. It’s a recommended read".
Posted by John Gray at Thursday, April 27, 2017