"One Housing to raise rents on key worker scheme by 40%" 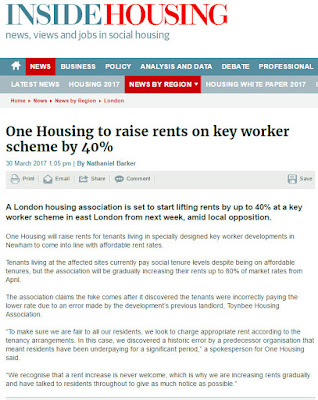 This story about the rent rises was on the Inside Housing website last week. I am in the process of responding to a particularly inadequate response I received from One Housing management.

A London housing association is set to start lifting rents by up to 40% at a key worker scheme in east London from next week, amid local opposition.

One Housing will raise rents for tenants living in specially designed key worker developments in Newham to come into line with affordable rent rates.
Tenants living at the affected sites currently pay social tenure levels despite being on affordable tenures, but the association will be gradually increasing their rents up to 80% of market rates from April.
The association claims the hike comes after it discovered the tenants were incorrectly paying the lower rate due to an error made by the development’s previous landlord, Toynbee Housing Association.
“To make sure we are fair to all our residents, we look to charge appropriate rent according to the tenancy arrangements. In this case, we discovered a historic error by a predecessor organisation that meant residents have been underpaying for a significant period,” a spokesperson for One Housing said.
“We recognise that a rent increase is never welcome, which is why we are increasing rents gradually and have talked to residents throughout to give as much notice as possible.”
But Newham councillor John Gray said: “[One Housing] were given these properties to house key workers on fair rents. If they don’t want to honour that then maybe they should consider giving the flats back to the local authority.”
Around 50 tenancies are understood to be subject to the changes, though One Housing is understood to be currently auditing and could find similar situations at other sites. The association has not decided on the rate at which it will introduce the rent rise.
Posted by John Gray at Tuesday, April 04, 2017