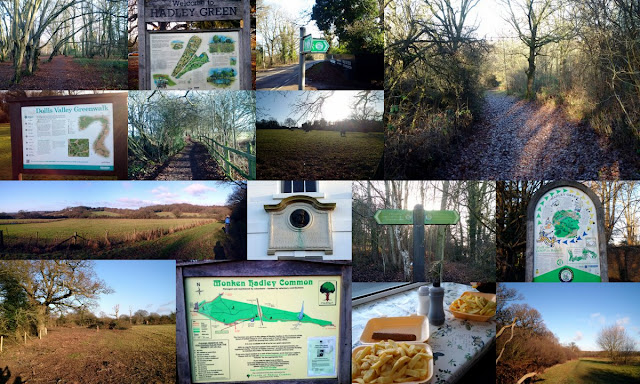 This post is just a little late. Despite the lovely blue skies shown in the collage, Gill and I did this 11th section of the London Loop walk on 2 January 2017. It was cold day and even frosty in parts.

Elstree is the home of the UK film industry but while not exactly the most glamorous town I have ever been to it is clean, prosperous looking and close to lovely countryside.

This particular London Loop walk has far too much time being spent alongside noisy roads but also has plenty of quiet, peaceful country and woodland spaces. The Dollis Valley Greenwalk is (mostly) delightful and reminds you of ancient Hertfordshire meadows and hedgerows.

Since it was such a cold day we stopped off for a massive portion of yummy chips in Barnet (I had to have the torpedo sausage as well. It is the law I understand, in such circumstances)

Hadley Green, Barnet is the likely site of one of the most important battles ever fought in the UK. On Easter Sunday 1471, the War of the Roses was effectively decided when the Lancastrian Earl of Warwick was killed on this battlefield by Yorkist soldiers.

As a social housing bod I was curious to see the Monken Hadley 1612 almshouses, that were originally intended for "six decayed house keepers".

Hadley Common (or Enfield Chase?) is a magnificent woodland walk even when you have to cross the London to Scotland Mainline Railway track. Cockfosters Underground Station is easy to find and there are fast and frequent trains back into London.

In summary, yet another great London Loop walk. Only 4 more to do.
Posted by John Gray at Sunday, April 02, 2017