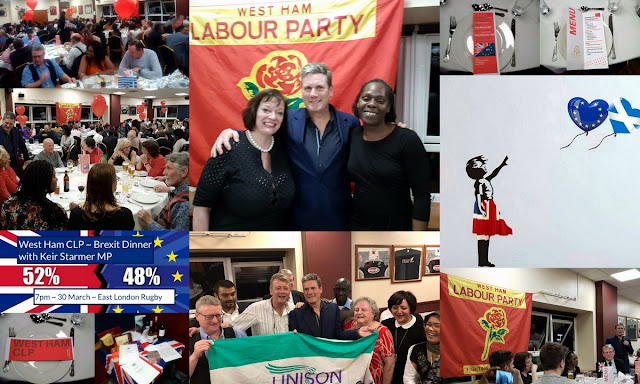 Picture collage from the fully booked dinner on 30 March where over 120 members turned up to listen to the Labour Shadow Secretary of State for Exiting the EU. By coincidence this was also the day after the Prime Minister had formerly "triggered" the UK Exit from the European Union.

Our MP, Lynn Brown, spoke first then Keir gave an honest and, sometimes, frank speech about the huge problems which lie ahead for our country.   He stated that Labour will fully honour the democratic "Brexit" decision while trying to make sure that the final Brexit deal will be as beneficial to the UK as is possible.

He then took "questions", which since this was a West Ham Labour event, were sometimes challenging but he responded to in a thoughtful and intelligent manner.

Many thanks to Lyn, our CLP Chair Charlene, Alan our CLP Secretary and the many others who made this night such a success.  Especially the East London Rugby staff and the caterers.

I was pleased that UNISON London regional Labour Link made a financial contribution towards the campaign fund raising as well and a number of our activists were there as well.  The event was so successful we are already planning another event in the near future.
Posted by John Gray at Sunday, April 09, 2017