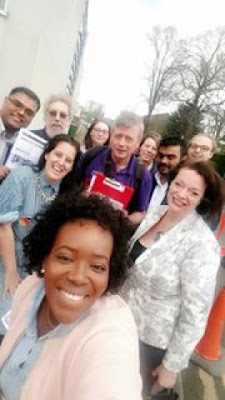 This morning I was happily enjoying an Easter holiday sunshine walk in the countryside, when the Chair of West Ham Constituency Labour Party rang my mobile.  Luckily (or not as the case might be) I had a signal and spoke to her.

It soon became clear that Theresa May had decided not only to ruin the British economy by a hard Brexit but also my peaceful holiday by calling for a snap General election.

While climbing across styles and frightening sheep and lambs, I had more calls with our current West Ham MP (soon to be candidate) and other Officers as well as exchanges of emails and texts.

So it looks like that I will be the West Ham Parliamentary Agent for the 3rd time.

We will be campaigning hard not only to win decisively in West Ham but also whatever marginals are given to us to support by the Party. UNISON and the other affiliated unions will also be gearing up for the fight.

It will be a very tough call to win the general election since we are far behind in the polls but the one thing I have found to be true in politics is that that you should never say never.  Who thought that we would be leaving Europe or that there would ever be a President Trump. Labour has the best policies on jobs, housing, education and austerity  . No one gave Jeremy a chance as leader in 2015 and yet he proved everybody wrong. He can do the same again.