"Greater love hath no man than this, that a man lay down his life for his friends" Worker Memorial Day 2017 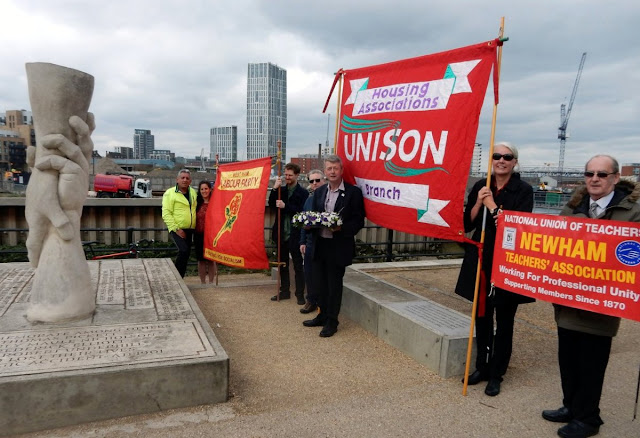 Today is Workers Memorial Day, and across the world trade unionists remember the 20,000 British and the 2.3 million deaths of workers worldwide who die prematurely every year in work related accidents or from occupational disease.

In Three Mills Green, Stratford, East London there is a memorial to 4 workers who lost their lives while at work. On this site there used to be an underground well next to a Gin distillery. On July 12 1901 a worker was sent down the shaft to carry out work but was overcome by toxic fumes. Three of his fellow workers went down the shaft, in turn, to try and rescue him and were all in turn poisoned and died while trying to pull their comrades to safety.

The "Clasping hands" statue was later erected to honour this sacrifice.

West Ham Labour Party, UNISON Housing Association branch and Newham Teachers Association (NUT) have for the past several years laid a wreath on Workers Memorial Day at this site to remember all those who have died at work or from work related ill health.

Next year, 2018 Workers Memorial Day, is on a Saturday (it's always on 28 April) so we hope to hold a bigger event, inviting local schools, Woodcraft folk, all parts of the Labour Movement and progressive employers to attend and participate.

This part of East London is steeped in working class history. Behind this picture you can see the London Match Girls Strike Building and also the 2014 London Olympics Stadium.

My UNISON Branch Chair, Tony Power, addressed the gathering and pointed out that due to good health and safety agreements and practices with trade unions, no workers was killed building the London Olympic Stadium. While in a country such as Qater, which does not recognise trade unions, it is thought that 7000 workers will die by the time the World Football Cup kicks off in 2022.