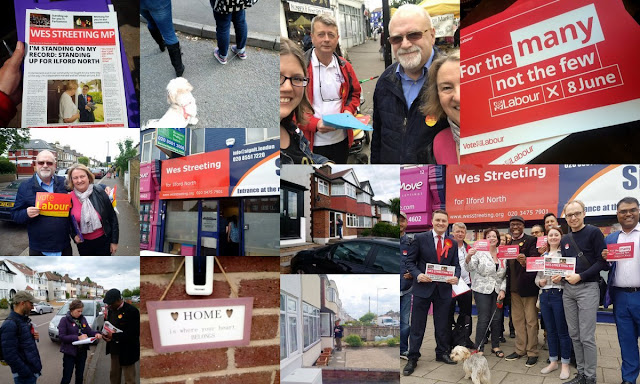 Yesterday we ordered our first West Ham CLP freepost leaflet (the relief). Today I had the Board for a team of local Party activists in Forest Gate North. There was 4 of us and I asked each of them to visit a particular address and ask the residents their voting intentions in the General Election. I then recorded the result and will input the information into the Labour Party data bank called "contact creator".

I was really pleased to note that there were two street stalls and at least 5 ward canvass teams out today in the West Ham Parliamentary seat. Members were also at the Westminster North and Ilford North marginals.

There seems to be a "North" theme to our campaigning today.

In Forest Gate the canvassing results were frankly excellent with solid support and many former Party supporters returning to the Labour fold.  As always some do not like the Labour leadership or certain policies but there was an overwhelming support for Labour and also for Jeremy Corbyn.

To make things interesting ,we had a team competition on how many "Vote Labour" posters we could hand out to supporters to put in their windows. 16 residents accepted the posters (Roger was the top canvasser with 9). We also gave out voter registration and postal vote application forms.

In the afternoon I joined our MP, Lyn Brown, and other West Hammers to campaign in the Ilford North marginal. While there was a difference in the level of support it is clear that the new Labour MP for Ilford North, Wes Streeting, is a popular and respected as an active and hard working champion of the seat.

I was mentoring an activist who had never been out door knocking before and unfortunately the first person he spoke to said he was Tory supporter! Most were not.

At one family sized house we called at we discovered that 16 people lived there and the private landlord charged them all £400 per month.

Tomorrow morning I am out again with Forest Gate North. We are meeting at Coffee7 for 10.45, setting off at 11am. Then 2pm at Ilford North Campaign HQ, 12a High View Parade, Woodford Avenue, IG4 5EP (a 12 min walk from Gants Hill stn on the Central Line).
Posted by John Gray at Saturday, April 29, 2017