Sunday Night Live - 5.00pm, 29th November: The NHS - in a state of perpetual upheaval and crisis? Where now for the Health Service 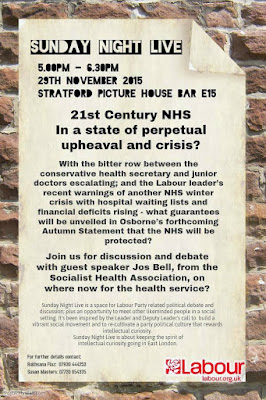 "Whether they have billions to invest or need to dramatically cut budgets, few British governments have resisted imposing their own blueprint for reform on the NHS, with the consequence that in the past two decades health service staff have had to endure almost endless upheaval

With 98 percent of junior doctors voting for strike action; the Labour leader’s recent warnings of another NHS winter crisis; and hospital waiting lists and financial deficits rising, what guarantees will be unveiled in Osborne’s forthcoming Autumn Statement that the NHS will be protected?

This NHS special Sunday Night Live session will explore the challenges the health service is currently facing, including:

· The impact of an ageing population and increasing social care demands on hard-hit local authorities.

Join us over at the Stratford Picture House bar (Salway Rd, London E15 1BX: http://tinyurl.com/ntmwysz) to discuss these and other associated issues with our two guest speakers:

Jos Bell is the Chair of the London Branch of the Socialist Health Association. She is an author, NHS campaigner and disability spokesperson. She writes for a number of publications on health policy and the NHS, disability rights and welfare reform. For more see: https://www.opendemocracy.net/author/jos-bell

Nigel Keohane is the Deputy Director and Director of Research at the Social Market Foundation. Nigel oversees the SMF’s research programme and leads the work on public service reform and commissioning, welfare reform and low pay, and pensions and savings. Prior to the SMF, Nigel was Head of Research at the New Local Government Network think tank, worked in local government and taught history at Queen Mary College, University of London. He has a BA and MA in history from Exeter University, and a PhD in Political History from Queen Mary. For more see: http://www.smf.co.uk/publication-author/nigel-keohane/

("Sunday Night Live" is a series of friendly monthly conversations and debates for Labour Party members and supporters)
Posted by John Gray at Monday, November 23, 2015