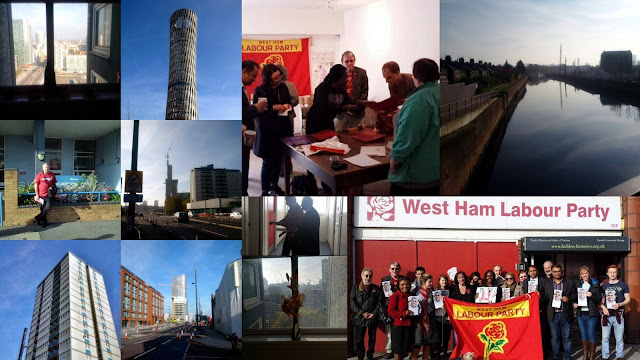 On Saturday West Ham Labour were out in force "on the knocker" for our Labour Mayoral candidate, Sadiq Khan.

I went out with a team to canvass Stratford ward tower blocks. It was a lovely warm, sunny day, despite being the 31st of October. We saw lots of excited children dressed up for Halloween. Their parents doing their best for their kids despite being worried sick about their future if there are no tax credits.

Interesting comment by one resident about how he was a life long Labour voter but in the past he thought there was no difference between Labour and the Conservatives but now there was too much! Neither view I agree with at all but this is the sort of narrative that we have to tackle head on. How can anyone really believe that an Ed Miliband Government would have not been radically different that this current one? We need to explain and show that the only extremists in British politics are the Tories.

The canvass returns for Sadiq and Labour were very good. He has name recognition and ordinary Londoners can relate to him in a way that his multimillionaire Tory opponent has not a clue about.

(Sad to hear last night of the death of Brent Labour Councillor, Dan Filson. I saw him speak at Labour Party Conference this year and at a pension fringe. RIP Dan)
Posted by John Gray at Monday, November 02, 2015