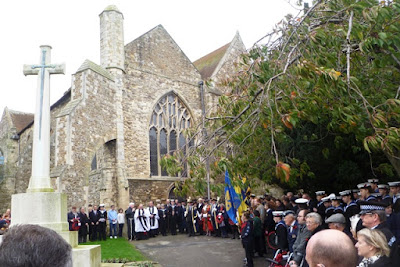 This Remembrance Sunday I was in the ancient town and port of Rye in East Sussex. Picture is from the service this morning outside the. 12th Century, St Mary's Church.

I waited outside with other onlookers.  At 11 am the 2 minutes silence was marked by an unexpected loud cannon or gun shot which was also fired again to mark the end.  This is always a poignant moment, spoiled somewhat by a thoughtless women, who talked throughout the silence.  She was thankfully drowned out by the cry of seagulls loudly protesting against the cannon shots.

At around 11.45 the Church service finished with "God Save the Queen" (In the meanwhile I had gone and had a look around the excellent nearby Rye Castle also known as Ypres Tower)

The service outside was led by the local Vicar. Wreaths were laid by the Mayor, Conservative MP Amber Rudd, the British Legion, cadets, guides, scouts, emergency services and many other local organisations and schools.

A young sea cadet read out the list (a long one) of men on the memorial who had been killed in 1915.

In a nice gesture, cubs, brownies and other small children planted small wooden crosses each each with an individual name from the memorial.

The latest name on the memorial was Corporal John Rigby, 4th Battalion The Rifles, aged 24, who died from injuries sustained by a roadside bomb attack in Basra, Iraq on Friday 22 June 2007.
Posted by John Gray at Sunday, November 08, 2015