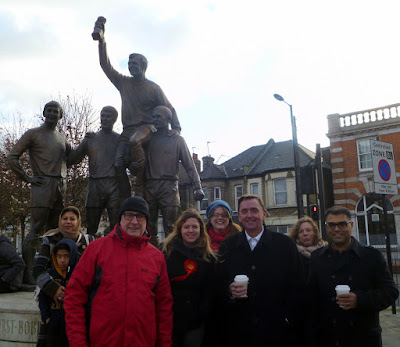 The statue is the "World Cup  Sculpture" and celebrates the famous victory scene photographed after the 1966 football final, featuring Bobby Moore, Geoff Hurst, Martin Peters and Ray Wilson. Three of them played for West Ham FC at the Boleyn ground just across the road.

It was the first cold day of the season and I had forgotten to bring any gloves, so of course, I was volunteered "to run the board". This means sending activists to call at particular addresses to ask residents their voting intentions and to record the results. It is more difficult than it sounds, especially when you have a large team and don't know the area that well.

We were calling on postal voters, so there was a lot of walking in between addresses which kept us warm. My philosophy when running a board is just to get on with it. Speed ahead and force the pace. Don't let canvassers stand around amongst themselves chatting and gossiping, when they could be knocking on doors and speaking to real people. The sooner we get it over with the better.

I must admit that when I am not running the board, I have a somewhat different attitude. Standing around engaging in political debate and discussion (aka gossip) amongst canvassers is an important and vital part of the door knocking process.

Anyway, yet another really successful canvass for Labour and for Veronica, who is working her socks off in this election and deserves all our support.

Today (Sunday)  - two more sessions: morning session and 1.45pm meet @ Bobby Moore Statue in Barking Road, E6 1PW  - opposite the Boleyn pub. I think that there will be canvass sessions all next week at 5.45pm and telephone canvassing at the Trinity Centre, East Ave, London, E12 6SG. All with 10 minutes walk from tube stations. Will update later.
Posted by John Gray at Sunday, November 22, 2015