Boleyn by-election - on the knocker on a windy tuesday 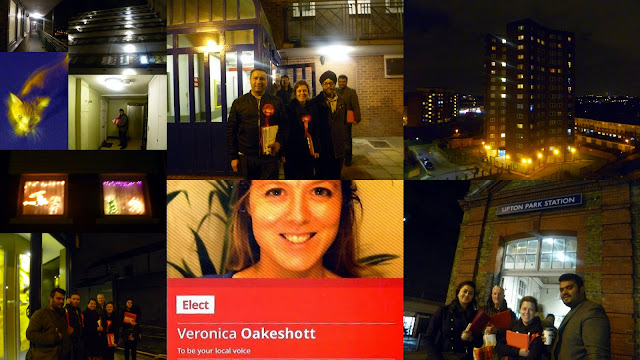 This evening I was with the Labour candidate for the Newham Boleyn ward by election, Veronica Oakeshott and comrades from East and West Ham Labour Party. We met outside Upton Park station in East Ham.

It was windy (#StormBarney) but only a little wet. Boleyn ward Councillors, Cllr Obaid Khan and Cllr Harvinder Singh Virdee turned up to help as well.

It was very dark and I regretted not bringing a torch. The canvass team was led by East Ham CLP secretary, Miriam Dawood, who had to use her mobile phone to read out the names and addresses for us to door knock.

There was a fantastic response for Labour from residents.  We would ask them if they wanted to speak to the Labour candidate and Veronica had to rush from door to door to introduce herself to residents.

I could not believe that some residents had already put up Christmas lights and decorations!

The by election is on Thursday 3 December and if you can help out beforehand with any leafleting, door knocking or telecanvassing then please ring 020 8586 7556 (I will post further contact details later).
Posted by John Gray at Tuesday, November 17, 2015