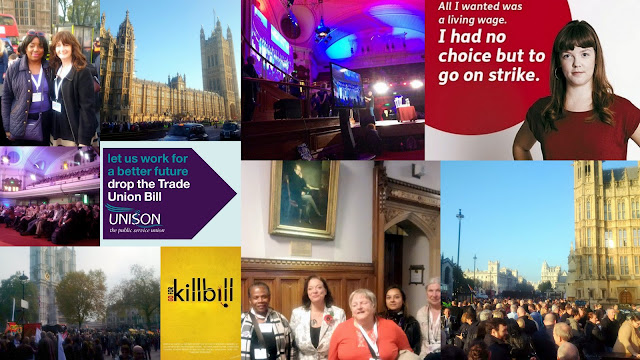 Picture collage is from yesterday's TUC protest rally and Parliamentary lobby against the Tory Trade Union Bill which is an attempt by the Government to attack fundamental rights and freedoms at work.

First, there was a lunchtime rally in Central Hall, Westminister, which was packed out with over a 1000 people waiting outside. Great speeches and even a song from the UNISON staff Choir. Next I queued for over an hour to get inside the House of Commons to lobby my MP, Lyn Brown, on the Bill.  Lyn has many years of experience in the real working world and knows what is being proposed is unworkable, petty and spiteful as well as a constitutional outrage.

After a group of West Ham residents met with Lyn, some went into the Commons' public gallery to watch the debate on the Housing and Planning Bill. By coincidence (or not) this is yet another hard right, extremist Tory Bill. It was really good to see Labour Shadow Housing Minister, John Healey, monster his Tory minister opponents in this debate.

It was incredible to see and listen to the Tory ministers and MPs' inability to argue in favour of this Housing Bill. All they did was try and score points about what Labour did or did not do in 2009. John had to gently remind them that they had been in power since 2010.

Most of the Tories actually know both the Trade Union and Housing Bills are very dangerous, divisive and authoritarian. Ironically they are arguing for the ending of local democracy and employment freedoms in favour of "Big Government" politics.

Housing Associations and Council Housing stock are being effectively stolen by the State while peaceful picketing and protest will be criminalised.

A future Labour Government has now a precedent on how to act when we next win power.  The Tories will reap what they sow.
Posted by John Gray at Tuesday, November 03, 2015