West Hammers play away at Palace 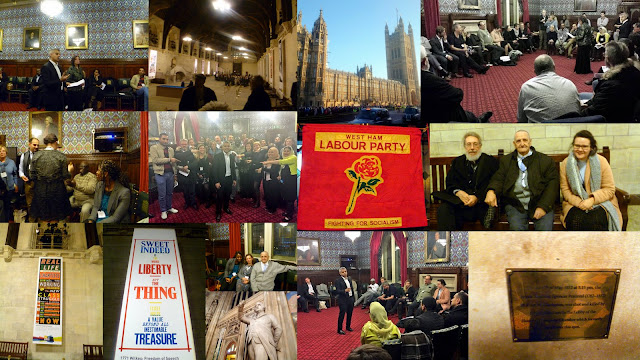 Picture collage from last Thursday's meeting of the West Ham Labour Party General Committee, which courtesy of our MP, Lyn Brown, took place at the Jubilee Room in the Palace of Westminster. Beforehand we went on a guided tour of Parliament, led by our Vice Chair, Julianne Marriott, (who is a qualified Blue badge guide) and members of Lyn's team.  This included a visit to the Chamber of the Commons itself (which was obviously not in session).

Veteran Party member, Ted Nolan, was not impressed with Parliament at all and wanted to know how much it cost to run and maintain.  I thought it best not to mention the £5.7 billion estimate to refurbish it.

Next was drinks and nibbles in the Jubilee Room (which MPs can book if they are successful in a ballot).

Lyn spoke first and read out a message from Labour leader Jeremy Corbyn MP to West Ham "home of the first ever Labour MP Keir Hardie ". Keynote speaker was Labour London Mayoral candidate, Sadiq Khan, who spoke about his plans if elected - living rent, 50% affordable housing for new developments, build on land owned by Transport for London (they have a land bank equivalent to 16 times the size of Hyde Park); cutting fares and zero tolerance of hate crimes.

The Q&A that followed was as usual dominated by housing issues, in particular affordability. I asked about what he could do to improve the governance of Housing Associations in London, many of which (not all) are seen as unaccountable and unresponsive (and even worse e.g. those that refuse to recognise trade unions). Sadiq made it very clear that as Mayor he will not work with Housing Associations that act badly, especially if they do not meet his affordability targets.

After the speeches, we hovered up the food and wine and then a group of us continued solving all the problems in the world in the nearby "Westminster Arms".
Posted by John Gray at Saturday, November 28, 2015