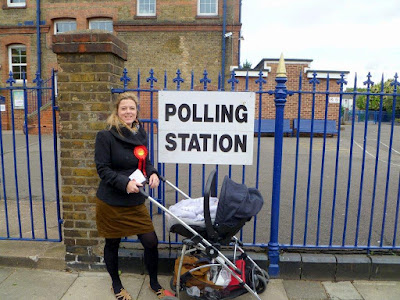 Congratulations to Veronica Oakeshott for being selected as the Labour Candidate in Boleyn ward in East Ham for the by-election on 3 December 2015.  Commiserations to the other excellent candidates.

The by-election was caused by the sad and unexpected death of local Councillor, Charity Fiberesima.

If elected Veronica will make an excellent Labour Councillor.

Seen here campaigning for Labour with her baby daughter outside Newham polling station during 2014 Council election.
Posted by John Gray at Thursday, November 05, 2015