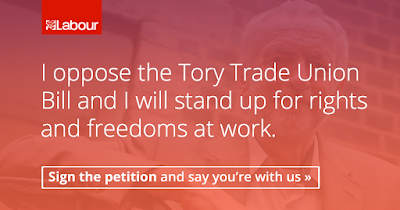 "This constituency believes the Trade Union Bill passed by the House of Commons and now about to be considered by the Lords shows this Government is determined to shackle the voice of working people via its attack on the trade unions.

This constituency further believes strikes are a last resort but the requirement of a minimum 50% turnout amongst members entitled to vote and a further 40% yes vote threshold (i.e. 80% of those who vote) in ‘important public services’ are an attempt to silence working people.

This constituency now believes the right to strike is under threat and this is a fundamental attack on human rights. We are concerned that allowing the use of agency workers to break strike action will lead to staff carrying out work they are not trained for and potentially lead to unsafe workplaces and services.

We believe facility time arrangements for local union reps and the deductions of subscriptions through payroll are matters between employers and recognised unions in the public sector and are the basis for good industrial relations and it is counterproductive for the Government to stop or restrict these arrangements.

This constituency condemns the attacks on unions’ political funds as a shabby attempt to undermine their public campaigning voice and the traditional relationship between many unions and Labour.

This constituency calls on the Labour Party, locally and nationally, to: