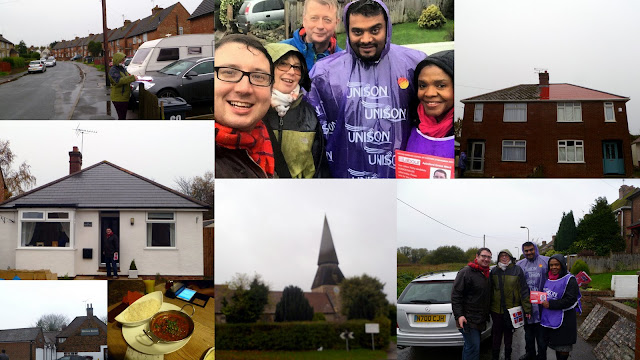 Today I drove down to Ashford in Kent with two other West Hammers, Anamul and Aleen,  to support our former CLP Vice Chair, Gordon Miller.  Gordon is standing to be a borough Councillor in Aylesbury Green ward. This is a Labour marginal seat so every vote will count.

On the way down it was pouring with rain and we speculated whether we will be door knocking or getting slightly less wet by delivering leaflets. Remembering Gordon's campaigning energy and enthusiasm, I had little doubt that he would have us door knocking.  So it proved. Despite Gordon and his agent Caroline being already soaked from the morning session, they were still up for speaking to residents.

The rain held off a bit and the canvass itself was actually quite fun, chatting to residents about local and national issues. While there is differences in the canvass returns for Labour compared to that in West Ham, there is strong support for Labour, even in so called Conservative "heartlands". It reminds me that it was in rural England not the cities that the Labour movement first started.

Afterwards we warmed up and dried out in the local pub "William  Harvey" in Church Road. Anamul had a Nepalese curry cooked by the former British Army Gurkha landlord, which he said was as good as any in Green Street.

Tomorrow more West Hammers will be driving down to help out but after this we will be concentrating on our own Newham by-election in Boleyn ward and supporting our candidate Veronica Oakshott.

The Aylesford Green by election is next Thursday 19 November 2015. If you can help out then let Gordon know via Facebook "Ashford Labour" or @Ashfordlabour.

UPDATE:
What a shame. Gordon lost by 4 votes! Politics is a cruel game at times but a great result that Labour got a third of the vote in a Tory heartland.