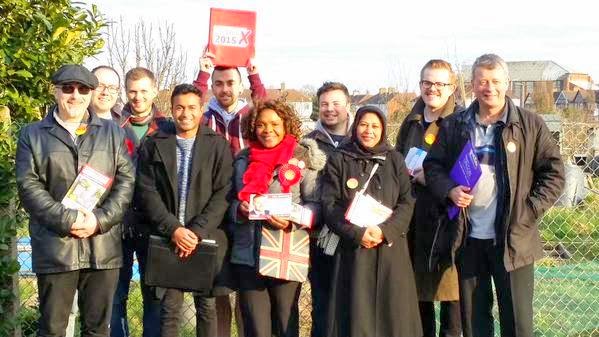 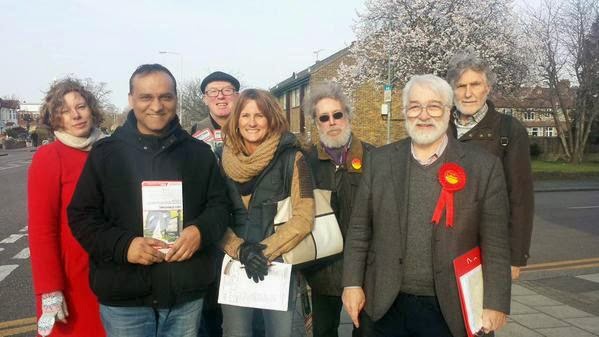 After our street stall today in Stratford many West Ham Labour Party members went off to canvass  in the marginal seat of Ilford North to support Wes Streeting as its future Labour MP.

We were split between two large local canvass teams. It was a little cold but mostly sunshine and blue skies. In our team we had a little bit of light hearted banter with some builders refurbishing a house about who they should vote for in the General Election. One of them claimed he was "posh" so he had to vote Tory. I said since they were hard working Labourers they had to vote for the Party called "Labour" Not sure they were totally convinced.

I knocked on one door and an elderly lady answered and explained that she was looking after her grandchildren while her daughter and her husband was out.  I asked whether she knew if they voted Labour, she looked at me with surprise and said of course they would be voting Labour for the sake of their children. I had to tell her that I couldn't agree more.

Afterwards we had a political debrief in the "New Fairlop Oak" in Barkingside (also known as "well deserved drink and bite to eat").

As always considering we were campaigning in a ward with 3 Tory councillors, the response was very good. I have also never seen any opposition canvassers in this ward in the 7 months we have been helping out.

West Ham Executive Committee approved this week a comprehensive campaigning plan inside and out of the Constituency leading up to the General Election on May 7th. We are all going to be busy, busy, busy.