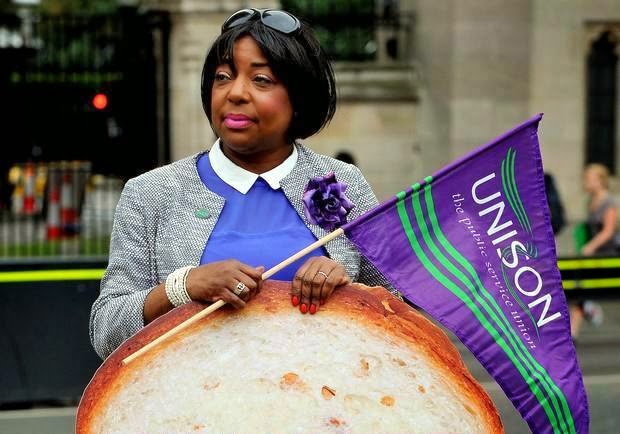 I was pleased last week to hear that I had been elected unopposed to this year's UNISON Labour Link National Forum with Jonathan Slater and James Beckles.

There is still an election for female delegates to National Forum and Labour Party Conference.

I would recommend (in a strictly personal capacity) that Greater London Branch Labour Link's consider  supporting :-

Ballot papers have been sent out to all London Branches and have to be returned by 12 Noon this Friday 27 March 2015.

Picture above is of Yvonne Green (featured in the Independent Newspaper) who has also this year been elected (by a massive majority) to be the London UNISON Convenor.

Below is their joint election statement

"We are all seeking election to represent the views of APF payers in the London Region at the National Labour Link Forum.

We support the link we have with the Labour Party. Labour in National Government has delivered real improvements for our members. We do not know what will be the result of the General Election but for the sake of our members, our NHS and our union, we need to do whatever we can to defeat this ConDem Tory Government in May

Labour needs to appeal to their core Labour vote and champion trade union issues to help them win. We want to move our members concerns up the Party political agenda, using our influence to promote Labour movement values such as:-

You want delegates who will be listened to and not be afraid to argue for change within the Labour Party but who also realise that the only alternative to Labour is another dose of Clegg and Cameron.

It is vital that we ensure that Labour Link becomes more visible within the union. We need to encourage APF members to join local Labour Constituency Parties and be elected to positions of responsibility in order to further the progressive agenda.

Next year London will also be electing a London Mayor and new Assembly and we need to play our part in this election. But we now must unite around the Party and work to bring down this ConDem Government on May 7"
Posted by John Gray at Sunday, March 22, 2015