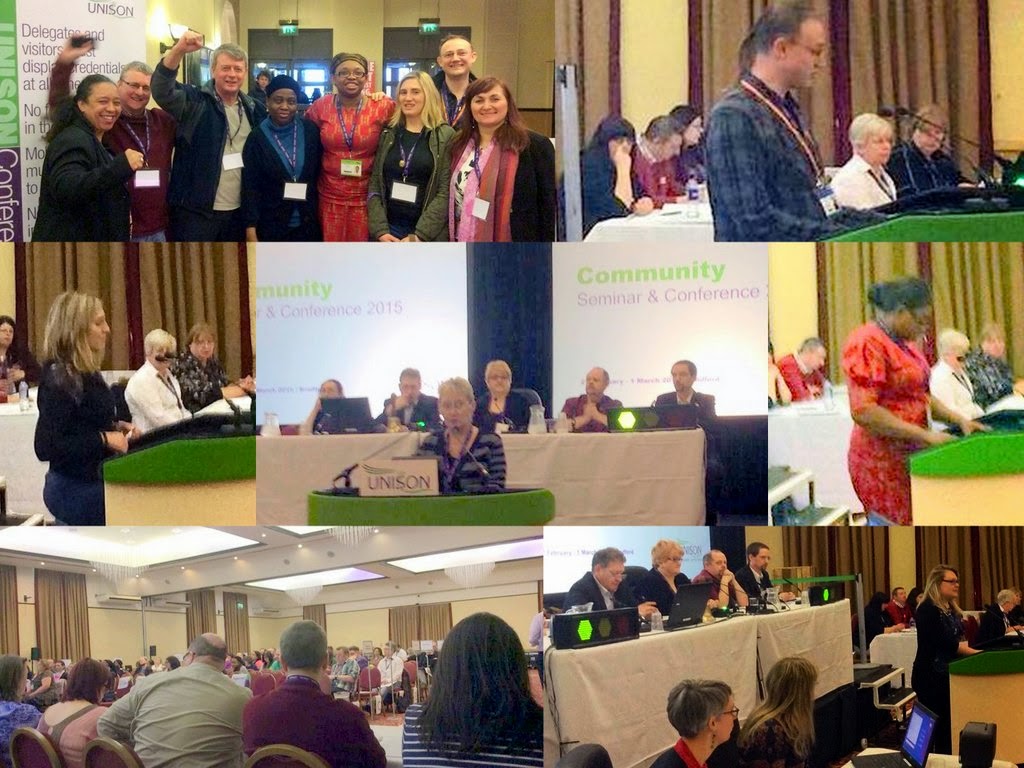 On the train back to London with UNISON delegates after our annual National Seminar and
Conference in Bradford.  See previous posts on the Seminar which took place immediately before here and here.

The Conference was chaired by UNISON Vice President Wendy Nichols. Community is the Service Group for UNISON members who work for Housing Associations and Voluntary organisations. We are the third biggest Service Group in the union and have over 60,000 members and I was there as one of the two National Executive Committee members for Community.

After the usual introductions, standing orders report and appointment of tellers the Annual Report was accepted and the debates on motions began.  There were 10 different motions which were debated. All were supported by the Service Group Executive (SGE) and all motions were agreed by Conference and are now our policy.  Including my branch motion on Union busting.  I spoke on the Pensions Composite (which was an agreed merger of two motions) on behalf of the Service Group Executive.

There was some incredibly powerful speeches made with delegates explaining their struggle to provide quality services while on the minimum wage or zero hour contracts. One speaker explained how she had to depend on food banks to survive. It was also pointed out that there was only 3 young members present (including Rachel from our branch) which is not good and needs to be addressed.

There was quite a controversial point put forward by one delegate during the debate on welfare reform that anyone who does not think that there is any difference between Labour and the Tories are "fools and liars".

This is now I believe our 5th Community Conference and I think we are far more confident and certain of our identity as a separate, independent and growing Service Group within UNISON.  We were pretty united as a Conference and aware of what we are up against and what we have to do to defend and represent our members. Key to this is trade union recognition, organising, recruiting more members and activists while ensuring that we have effective structures and local support.

(picture of London delegates speaking on motions and centre of June Poole moving Pensions compositive A)
Posted by John Gray at Sunday, March 01, 2015