Keep It Co-op (and Save our Political Voice) 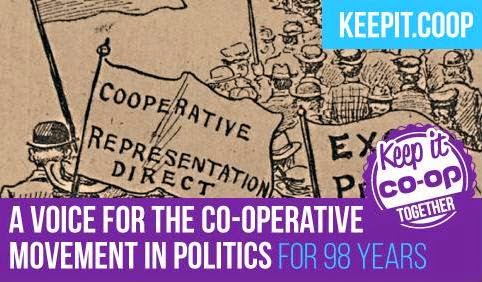 2 or 3 times a week I shop at my local Co-op and I have a savings account with the Co-op Bank.

The Co-operative movement has gone through a pretty awful time in recent years largely due to debt and the governance failures of the Co-op Bank following the Financial Crisis.

But there is still a massive consumer retail co-operative movement in this country with 8 million members and 100,000 employees.I think it has potentially a bright future.

The arguments in favour of Co-operatives remain the same as do their values and principles. "Co-operative businesses are owned and run by and for their members, whether they are customers, employees or residents. As well as giving members an equal say and share of the profits, co-operatives act together to build a better world".

Co-ops are not perfect but how better is it to shop at your local co-op, rather than with other supermarkets who may pay their staff poverty wages on insecure employment contracts; cream off the profits, who don't care about the environment or are tax cheats.

At the forth coming 2015 Annual General Meeting of the Co-operative Group there may be a motion to end the link with the Co-operative Party, which would mean the end of its political voice and its representation in Parliament.

Ending the 98 year political voice of the Group would be a further blow to the movement at a time of rebirth after crisis. If there is no strong voice for co-operative values in politics and society then then we risk becoming further marginalised and then irrelevant.

I hope at the AGM members will vote to "Keep it Co-op" and save our political voice.
Posted by John Gray at Thursday, March 12, 2015