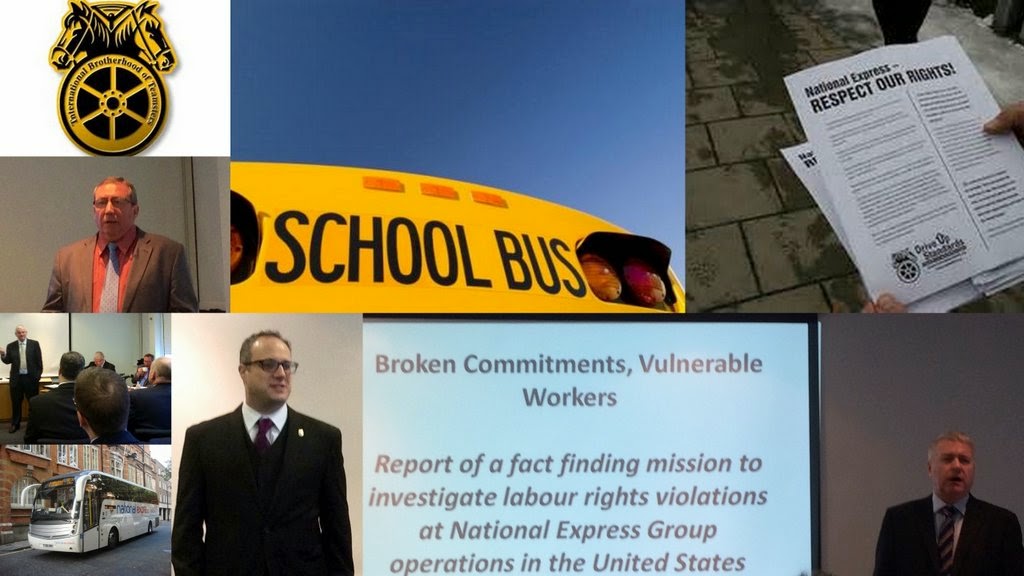 On Tuesday morning I attended  another presentation by US transport union, the Teamsters, to pension funds on the anti-union practises by a National Express owned US company called Durham which runs schools buses.

The Chair of the Local Authority Pension Fund Forum (LAPFF), Cllr Kieran Quinn, opened the meeting and made it clear that while he has a union background, as an investor he has concerns about the financial prospects of a company, that appears not to treat its workforce properly nor provide a safe environment for school children. He has had a number of meetings in the past with National Express where he has been told that the unions have exaggerated the problem. However, when he has asked for proof of this they have never produced this information.

Teamsters spokesperson, Louis Malizia, was even more blunt. The "poisonous" and "unsustainable"  anti-worker and unsafe business practises will put the company at risk. He described the union busting and black-listing activities condoned by National Express. How union activists are victimised for reporting safety issues and the company continues to ignore decisions in favour of the union by the US courts. The company is now facing a backlash over civil rights and is losing contracts.

The final two speakers were two British Members of Parliament, Ian Lavery, MP, and Jim Sheridan, MP, who had both gone over to the US on a fact finding visit. During this visit they spoke at community meetings, met school bus drivers and were interviewed by US press and television stations. They were also thrown out of a local bus depot run by Durham when they tried to visit.

Jim Sheridan, MP, asked why doesn't National Express operate in the same way in the US as in the UK where they have usually good relations with the unions? Why are they treating children's safety differently? Why are they putting profits above safety? This is not some sort of "Communist plot" but about safety. No-one wants "revolution" they want a "resolution". Other bus companies in the US recognise trade unions, run safe services and make money without exploiting people.

Ian Lavery, MP, spoke about the unacceptable and unsafe US school bus services that would just not be tolerated in the UK. The bus drivers are poorly paid but do a very responsible job. He is a former Pension trustee and understands the need to make money to pay for pensions but there has to be a social conscience. Ian introduced a report that he and Jim wrote about their visit that they are just about to publish called "Broken Commitments, Vulnerable Workers".

In the Q&A I made the point that not exploiting people is not just about having a social conscience it is also a good investment choice. Research shows that long term investors such as pension funds get better returns from investing in companies that have good governance and do not for example treat their workers badly. Also, why doesn't National Express engage with its shareholders such as LAPFF? What else are they hiding?
Posted by John Gray at Sunday, March 29, 2015