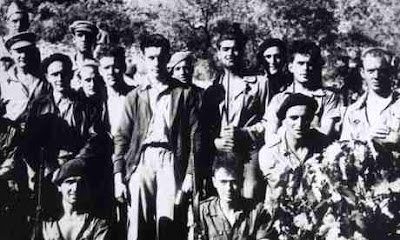 "Dear all, as it’s 100 years ago this year that Jack Jones was born, it
is appropriate to ask you to support this campaign.

Southwark News and Southwark Historical Society have drawn up a
shortlist of former and current residents and buildings nominated to
have a Blue Plaque dedicated to them. Only one will be successful following a public vote.

You don’t have to be a resident of Southwark to vote. Email Southwark News saying you’d like to vote for Jack Jones to get the 2013 Blue Plaque.

Hat tip via SERTUC.Picture of Jack in Spain (3rd from left). Jack lived in a Council flat in Denmark Hill, Southwark.
Posted by John Gray at Sunday, August 18, 2013