436,000 reasons why we need employee reps on Housing Association Boards 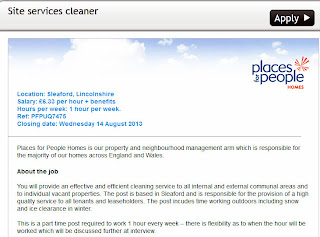 Last Friday Inside Housing magazine disclosed that the former CEO of the so called "not for profit" Housing Association "Places for People" received a total pay off of £436,000 when he recently retired (voluntary).

Because of this the Housing Regulator has downgraded the Association due to "governance concerns" and 3 board members have resigned.

Frankly, this response is grossly inadequate and appears to be mere hand wringing. This is not just an isolated cock up but indicative of a wider malaise. The impression given is that some large Housing Associations are run by some unaccountable, self perpetuating mates club. Solely concerned with enriching themselves from their residents, clients and of course, the public purse.

So what can be done to reverse this? There are vague calls for "restraint" but come on - do turkey's votes for Christmas? Will Hutton in his 2011 report on Fair Pay recommended there should be employee reps on public sector boards especially the remuneration committees (who decide pay). Such organisations should also publish the multiples between the lowest paid and the highest paid. Personally I believe we also need far more independent resident and client reps on all boards.

I had a quick look at the "Places for Executive Profit" website tonight and noticed an advert for an estate cleaner in Sleaford, Lincolnshire for £6.33 per hour (for a whole one hour per week!). This is  poverty pay and only 2p per hour above the uprated national minimum wage. I work it out that the CEO got pro rota 35 times as much as the cleaner that year. I suspect that office cleaning is outsourced. I wonder how much the worker who cleans the CEO office receives?


Why can't employee reps sit on all Boards? They sit with management on joint safety committees where they take decisions on the lives of workers and residents? They have employee reps on  pension committees where they decide on investing millions of pounds.  So why not on Boards and especially remuneration committees? In other arguably more successful countries than the UK this is just considered the norm? Employee representatives will be a brake on greed and corruption.

Unless Housing Associations clean up their act then I don't think there is a long term future for the sector. There has been a lot of genuine fuss and bother today about 30 staff at 14 foreign aid voluntary organisations being paid more than £100k per year. While I share this concern this is just small beer compared to the huge amounts paid in executive pay in most Housing Associations.
Posted by John Gray at Tuesday, August 06, 2013

Email ThisBlogThis!Share to TwitterShare to FacebookShare to Pinterest
Labels: executive pay, Inside Housing, pay, Places for Executive Pay, Places for People, will hutton

"I am member of the UNISON National Executive Committee"

Thats what it says on your blog. How come you have never blogged about Zero Hour Contract at Newham Council?

Well I suppose anon the reason is contrary to some assertions, I was not aware that there was any allegation that staff were employed on zero hours contracts?

Those who claim otherwise, are I am afraid, a liar.

Following a recent complaint by a constituent, I have contacted the Council (and the local union) on this issue.

Interestingly, the initial union reaction is that they do not recognise the figures out there in the social media ether?

It has been on Mike Law's blog
http://newhamnettles.blogspot.co.uk/2013/08/newham-council-and-zero-hours-contracts.html

I sent a members enquiry before Cable spoke and surely no one pays any attention to what big bad Mikey says?

I understand that there was a cock up with a FOI request and this is now being corrected.

My personal view is quite clear. Zero hour contracts are wrong and should be banned. I will bring this up at Newham Labour Group.

BTW - I also want a republic, much greater taxation of the rich,living wages and pensions, statutory limits on executive pay, far higher public spending, mass house building programme, rent controls, the renationalisation of monopoly utilities and railways and various other things that perhaps not everyone will currently share in Labour Group...but one day!

Newham Staff are being paid a living wage regardless of Zero Hours contracts or not.

Why is John Gray's point about the rip off and poverty pay of millions of non council workers being ignored?

We are just as important as council workers.

actually anon not all Council staff nationally(nor contractors) are paid a living wage.

The lowest scale point is £1ph less. We also need to make sure that all grant aided/agency and contracted staff receive Fair Pay (living wage, living pensions and fair terms and conditions).

I'm working on it.

"much greater taxation of the rich"

Before taxing the rich (which can mean anyone with a job)

Why don't you watch BBC's WE PAY YOUR BENEFITS

There is something seriously wrong, when the woman in the fulm struggles with 3 hours worth of cleaning?

Well, most people on housing benefit are in work and there are huge numbers of people on minimum wage jobs living in poverty.

While there is of course a tiny number of skivers, the vast majority on benefits are not.

I would agree about founders of companies not being subject to limits (and watch this space on this) but will expect them to pay their fair share in taxes.

The rich are the people who have so much money that they can live better than most of us, whether they work or not.

Quite a small proportion of the population.