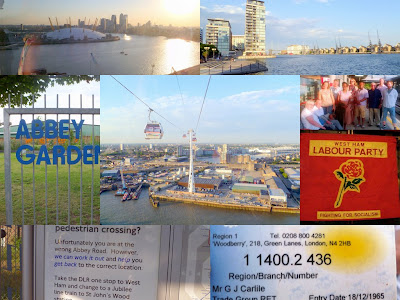 Off message a little but just to prove that not all Labour Party events take place in dusty meeting rooms or involve knocking on doors with clip boards.


We met at the new Abbey Road Docklands Light Railway station which is just outside our ward.  While waiting for others to join us, we had a quick tour of the nearby magnificent Abbey Gardens.

By 7pm 10 of us had turned up (including comrades from Plaistow North ward). I was stopped on the station platform by 2 tourists who asked me where "The Beatles" Zebra crossing was? I had to tell them that they were at the wrong Abbey Road and the one they want is near St Johns Wood station. This is quite a common mistake here. I was also once stopped by an American tourist at Stratford station who asked which way was it to "Shakespeare house"?

The nearest station for the cable car was Royal Victoria. The Dock and the Cable station was extremely impressive. Only £3.20 one way. Cabins normally took 10 people but it was a bit windy so we were restricted to 6. There was no queue and you just walked onto the cabin.

I have never been on this ride before. Our oldest ward member 84 year old Gerry had never been in a cable car before in his life! The view during the journey over Newham and East London was superb. Visibility was excellent. At Greenwich we had a few drinks, missed the last Cable Car back (9pm) then took a train on the Jubilee line to Stratford, then off to the Jamie Oliver Restaurant at Westfield shopping centre for a late meal and lots of hot air putting the world to rights. It was a good evening.
Posted by John Gray at Friday, August 02, 2013