Never forget: The Banks Caused this Recession...Counter "the vast lie" 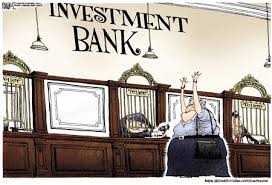 "There's a few things Labour should be doing in my view. They have to get a coherent line on the economy,"
Mullin told the BBC's World at One. "Firstly they've got to counter – and my goodness they should have been doing this for a long time – the vast lie which has been allowed to become embedded in the public consciousness that our economic problems were primarily caused by the last government.

"To paraphrase Bill Clinton: it was the bankers, stupid. The only thing Labour needs to apologise for is not regulating the banks sufficiently, and the Tories are not entitled to take advantage of that because throughout they were in favour of less regulation, not more."
Posted by John Gray at Tuesday, August 13, 2013

You know as well as everyone else Labour has bigger problems then just the banking crises you may well argue Labour did not see anything.

We all could see the housing bubble, nobody in Labour cared, Labour just hoped nothing would explode before the election, sadly it did big time.

Labour stupid comments about no more boom and bust only Labour believed that one nobody else did.

Labour has more issues then just the banking crises the wasting of billions with failed IT, the sell off of the NHS the Royal Mail the post office the Royal mint.

And now the Unions have a real issue after voting in Miliband he turned I suspect because the pair of ears is back in control.

I do not think we have seen the end of the two wars yet and the lack of backing by Labour for the troops on the front.

Until we win the argument that the recession was caused by the Banking sector and not Labour economic policies then we are stuffed.

Economic "competance" is key to winning the next election.

If you don't support what the tories are doing and want to get rid of them the choice is clear.

Up to you Robert.