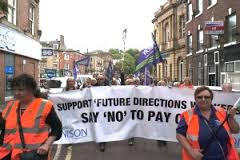 UNISON Press release "More than 100 workers have begun five days of strike action in order to send their employer Future Directions a clear message that the fight against the substantial cuts to their pay and terms and conditions has not gone away.

The strike began at 8am on Sunday 25 August 2013 and follows 14 days of strike action already taken in recent months.

Future Directions CIC which is a company owned by Calderstones NHS Trust, bid for the contract to provide supportive living services from Rochdale Council, knowing that to make the contract viable they would need to make financial cuts as soon as they were awarded the contract. Future Directions is looking to expand its business and bid for more contracts at the expense of the workers who continue to deliver care to vulnerable adults, taking advantage of the fact that these workers care about the work they do and the people they work with.

A march and rally has been organised for Thursday, 29 August 2013 at 12 noon on 'the Butts' in Rochdale town centre in support of the strikers and their campaign to continue the fight against imposed cuts on their pay, terms and conditions. Many workers are losing more than £500 per month and having to use savings to subsidise their wages to make ends meet.

UNISON is asking branches to help support the strike action by giving donations to the hardship fund and help these workers to continue with their fight for a fair deal for Future Directions staff in Rochdale. For any messages of support or donations please contact the Rochdale UNISON Local Government Branch, 46 Richard Street, Rochdale, Lancashire, OL11 1DU, email address: Unison@Rochdale.Gov.UK telephone number: 01706 925952, branch secretary: Helen Harrison.
UNISON is continuing to call on Future Directions CIC to enter into meaningful negotiations with a view to resolving this ongoing dispute".