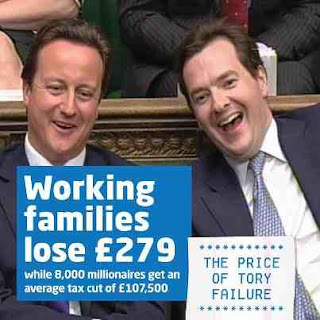 Hat tip to Labour and Capital blogger Tom P for highlighting how fund managers Fidelity are one of the biggest corporate donors to the Conservative Party. I wonder how many Fidelity policy holders or members of the local government pension scheme (Fidelity Worldwide Investment runs £3 billion of LGPS money) realise that profits from managing their pensions is going to fund David Cameron and George Osbourne?

"Readers of long standing may know that I've blogged a fair bit in the past about the financial and political relationship between asset manager Fidelity and the Conservative Party. On the Peter Cruddas scale, Fidelity are a "Premier League" donor. For example, they gave the Tories £300,000 in the year running up to the 2010 general election. Last year they gave them £100,000. They also employ the MP Srir John Stanley as a consultant. (They also chucked £50,000 at the No2AV campaign in 2011).

Oddly, over the years the way that Fidelity donates to the Tories seems to have changed. So up to 2008 they were listed as "Fidelity Investment Management" with the company reg number 2349713 or sometimes 02349713.

But from 2008 to the start of 2012 they started appearing as "FIL Investment Management", again using the same company reg number. Then, for the remainder of 2012 (three donations of £25,000), they appeared as "FIL Holdings", using the company registration number 6737476.

Keep up the good work Tom. Of course, you do wonder why the very highly paid directors of Fidelity choose to give all this money to the "tax cuts for millionaires" Party?
Posted by John Gray at Monday, August 19, 2013

Can you remind us of Ken's tax arrangements?

Don't you think 40% tax is high enough?. That is like saying you are working from January to May as a slave for the state.

Of course, anyone who is unemployed, can't be asked to do their bit for the community..... because that would "slave" labour.

Then you have the big multinational who pay no tax but Labour turned a blind eye...

and the relevance of Ken employing staff is?

No, it is not enough. Paying taxes buys civilisation. Tax rates should be far higher in return for a better society.

Of course the unemployed should be asked to do their bit for society.

Yes, you are right that Labour did not regulate (not tax) big multi-nationals enough and it will not make the same mistake next time.

You also forget that everyone gets nearly £10k in personal tax relief, then you can earn another £32k on 20% before you hit higher rate.

What do you mean by civilisation?

To help the poor and needy is morally the right thing to do. We can agree with that as a starting point.

Labour have failed to deliver a better society.

I worked to buy my house.

It makes me angry all the trouble makers who live in social housing are causing ASB, crime, abuse etc.. Even if you tell these youth to stop the ASB, you will get abuse or violence back - "I know where you live".

I once took a photo of kids who were repeatedly causing ASB. The mother came to tell me off, rather then discipline her kids. She was a single mother on benefits.

Two months ago, some scum have moved into the area. These people don't have jobs. Why should they have the right to rent a property equal to mine?. I have worked for it. There are a lot of disturbances. Police cars coming at 3am to stop disturbances...

Some of the other (nicer) residents, have moved out, as a result. It is easy for someone renting to move out...

We found out the landlord, of the problem property does not have a license, but it is pointless as we want these scum people to be kicked out. They have "rights". By their behaviour I am sure they grew up in council housing or housing association. Why do they move in area of private residences?

By given social housing and benefits, we did not end up with a better society.


People are beginning to question this. In Britain helping the poor had backfired.

Hmmm anonymous. I don’t think your arguments make much sense and are essentailly self defeating.

We don’t just want to "help” the poor and needy, we want to change their lives and make a society that there is no poor or needy.

It seems that the people who are causing you “problems” don’t live in social housing but are owner occupiers or private renters. In accommodation owned by unlicensed landlords?

So your problems are with irresponsible private landlords who fail to control their tenants?

How on earth do you assume these tenants “grew up” in social housing? Some of the worse ASB problems I come across in Housing are from middle class university students playing loud music and holding parties all night, middle class drug dealers and middle class slum landlords.

Move to a gated community if you want and become a prisoner for the rest of your life. Don’t deal with social problems and be like America where you have 30,000 gun deaths each year.

You are half right that the Labour Party did not deliver a better society. It made massive changes for the better but didn’t go the whole hog. In 2015 I hope and pray for all our sakes it will.