A Minimum Wage, A Living Wage or Fair Pay for All? 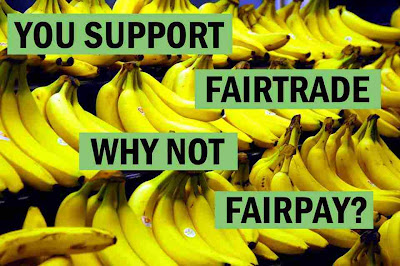 The introduction of the National Minimum Wage was one of the great successes of the last Labour Government and trade unions such as UNISON who had pushed long and hard for it.

So successful that we now take it a little for granted and forget the huge opposition from the Tories who claimed that it would lead to business failures and mass unemployment.

While a national minimum wage of £6.19 per hour is far, far better than no minimum, it is simply not enough to live on. It is poverty pay. The vast majority of workers on minimum wage will also need to have their wages topped up by the State in housing benefit or family tax credit.

The idea of a "Living wage" is the amount needed to "let workers lead a decent life". It is currently £7.45ph (and £8.55 ph in London).  Accountancy firm KPMG recently estimated that 20% of workers (5 million) are paid less than a Living wage.

Labour Leader Ed Miliband is in favour of making the Living wage compulsory in the public sector and in their procurement practices. He also believes in naming and shaming other companies that don't pay a living wage.

If this happened it would be a fantastic news for the low paid and also the British tax payers since we will not have to subsidise many poverty pay employers. It would also result in a welcome boast in demand for the British economy.

Yet, at the risk of being churlish, is even a "Living Wage" - not enough?

If you are on a Living wage but become sick and have no income protection you will immediately fall back into poverty. If you retire and have no company pension you will also fall back into poverty in old age. If you are on a Living wage but are on a Zero hour (or Bank) contract and have no employment protection, how can you live a "decent life" with no security? Ed Miliband is also  in favour of restricting Zero Hour Contracts. It has been estimated that there could be as many as one million workers on such contracts.

What about those traditional low pay sectors which can actually afford to pay more than just a living wage and also pay decent sick pay and a pension?

So what about the concept of "Fair Pay". This is a recognised goal of the International Labour Organisation (ILO). Your pay should not be just about your wage but also about sick pay, holidays, overtime, pensions and employment protection.   There are some private companies competing for public sector contracts who would quite happily pay £7.45 per hour if they did not have to pay for decent sickness protection and pensions.

On the other hand today I met up with my lovely niece, her partner and their young family.  She works as a care assistant in a privately run mental health project. She loves her job but is on the minimum wage and on a zero hour contract. She does not receive holiday pay (which I need to check) and also cannot get family tax credit because she is on a zero hours contract.  She only gets statutory sickness benefits and no pension. Due to her income she is likely not to be eligible to be auto-enrolled into a pension.

If she was to get a Living wage and an extra £1.26 per hour it would transform her family finances but since she does not know from day to day what hours she will work and has no security of employment, it would still be practically impossible for her to make plans for her future.

The answer to such poverty pay and conditions is that the next Labour Government must be as brave and as radical on this and other issues as its predecessor in 1945.  While in the long run the best protector of decent pay and conditions are the trade unions. Post 2015 Labour should impose Fair Pay for All.  A living wage, living sickness benefits, living pension and employment security for all. While at the same time introduce binding sectoral bargaining agreements between unions and employers for those sectors which can afford to pay more than a Living wage.

While this will save the Government money by reducing the state subsidy on poverty employers and increasing demand in the economy, it will lets not fool ourselves, cost more, especially in the public sector. This is a price worth paying and will need to be paid for by increases in progressive tax rates on those who can afford to pay more.

I think to win the next General Election and get rid of the Tories we need to be honest with the public and also offer a genuine alternative. I asked my niece today if she voted in the last General Election. She admitted she didn't. I also asked if she thought the next Labour Government would ensure she would get a Living wage and security in employment would she vote for them? She said Yes. Her current MP is a Tory with a majority of just over 3000.