Why Eric Pickles is an eejit 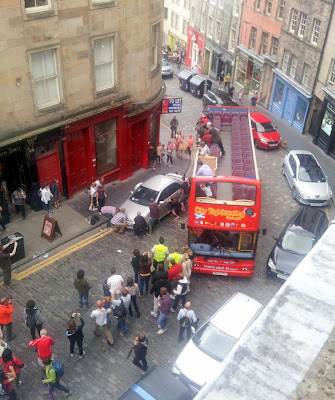 "At about 18:25 last Sunday 4th August I left Maxies Bistro and emerged onto Victoria Terrace. I soon became aware of an open-topped tour bus stopped below in West Bow. The driver was headed from Grassmarket for George IV Bridge, but could not get round the bend into Victoria Street.

Someone had parked a car on the double yellow lines on the off side of the bus. Much consternation and discussion of what to do about it. Eventually 10 concerned citizens grabbed hold of a perfectly reasonably parked car on the near side and moved it. Two Lothian buses inspectors appeared and carefully avoided getting involved in that.

The 10 concerned citizens then crossed the road and moved the obstruction. Tourist bus departed and one person wrote an abusive message on the back window of the former obstruction".
Posted by John Gray at Monday, August 05, 2013

Eric pickles is not an eejit. His double yellow lines comment is designed to catch headlines.....

Eric Pickes raises valid issues. Newham's high streets are out of bounds, unless you want to £2.50 per hour. Stratford / East Ham / Upton Park were all lovely places to shop. Upton Park had a Marks & Spencers. Lots of nice shops. Newham brough in over zealous parking enforcement. CCTV monitoring. Lies and cheating ways....

of course he is an eejit anon. Why do you think there is double yellow lines in the first place?

If Pickles plans were adopted there would gridlock in all major cities.

M&S closed years ago for various reasons. Not price of parking I seem to remember?

Whatever the RAC Foundation's research was, they chose to bundle together lots of different incomes and publish a gross figure. The top 8 Councils for gross income from parking charges and parking fines were 2 seasides and 6 central London Boroughs. Surprise!
Not a great rebuttal, anon. I don't think they'll be offering you Lynton Crosby's job.

(It was free for first 2 hours)

Why is a private car park cheaper then Newham's own?

East Ham's high street parking is the same. I don't know how Newham can keep a straight face by justifying those prices for a rubbish high street.


The Marks & Spencer shut down in East Ham. Upton Park M&S closed down, but not due to parking.

its not free parking now anonymous and why slag off East Ham shops? Much better than plastic rip off westfield

"why slag off East Ham shops"
Have you been to East Ham High anytime in the last few years??

I remember the old East Ham High Street. It used to be a reasonable place to shop. Now full of crappy cheap shops, too many pound shops, mobile phone covers, lacking presentation....

Lesson should have been learned from the decline of Upton Park's shopping street. Instead Newham council decided to send their army of wardens and hand out parking tickets. I wonder if those residents, who stopped shoppers parking down their street, are so smug now that East Ham high street is a sh**hole.

Well, I like Westfield and East Ham High Street.

I don't know what you are talking about potty mouth anon. East Ham High Street has great shops and restaurants.

It is actually getting better than it used to be.

Why are the "opposition" in Newham just moaners and whiners? Nothing is ever positive or constructive?