How to Solve the Recession: End Prohibition and Tax Drugs? 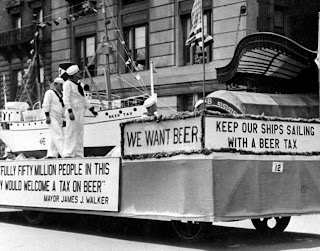 I listened this morning to "From our own Correspondent" on BBC Radio 4. One report was from Uruguay where they are considering legalising drugs. The main reason given for this was to put out of business violent drug gangs.

I remember being at a pension meeting a few months ago where we received a briefing from an economics adviser on the financial outlook. It was pretty bleak with the prospect of years of little or low growth, demand or investment and continuing cuts in public expenditure. The adviser broadly supported current government policy.

I said there is always an alternative economic policy and why couldn't the UK do what governments did before the second world war - borrow money and invest into massive infrastructure projects to pump prime the economy out of recession?

The adviser made an interesting but provocative response. He said that many people who look to the massive state investments during the New Deal economic programme in 1930's America as an example of what we should be doing now miss an important point. This huge investment was largely fully funded and not borrowed. It was paid for by the ending of the prohibition on alcohol in America, which led to increases in taxation, which paid for the New Deal investment.

While I do not accept all his arguments it did bring the question to the fore that should we in Britain legalise and heavily tax drugs in this country to bring in enough Government revenue to pay off the national debt and invest to bring about recovery?

Since we were at a pension trustee meeting, sadly it was decided that such matters were not really within our remit and we continued to discuss the normal "boring but important stuff" such as valuations, fund manager reports etc.

I have for many years been convinced that we have lost the war on drugs and we should consider legalising them to get rid of the violent drug gangs. There will still have to be safeguards and it will have risks but if by ending this prohibition and then heavily taxing drugs, we can bring about the end of this recession, is this not yet another powerful reason to at least consider it?

"and then heavily taxing drugs, we can bring about the end of this recession"

I am astounded, you would propose profiting from the immoral trade of drugs.

Drugs ruin lives. If drugs were legalised more people would take them and the number of drug addicts would increase. It is no different to trying to curb smoking habits.

As a Councillor, you should visit these rehabilitation centres. Why don't you ask what the addicts say?

There is a case for the legal supply of drugs to people who are already addicted, so that they don't commit crime to feed their addiction.

Nor have you considered, what these criminal drug lords would get into once their lucrative drug trade has disappeared?

I "propose" considering it. We "profit" already from the immoral trade in cigarettes.

Drugs do ruin lives. How many die and how many lives suffer from the drug alcohol?

Not sure if you legalise the number of addicts would increase? To many people drugs are glamorous in part since they are illegal.

I have been working with drug addicts and the consequences of drugs abuse for 25 years. They have mixed views on this subject. But I can tell you for certain one thing they will say - prohibition is not working.

The people who oppose the repeal the most are of course the drug dealers. Many will remain criminals but will not be able to make the money they make now to fuel widespread and mindless violence.

This is a difficult subject but we need to start a debate.