UNISON Save our NHS March and Rally Sunday 29 September 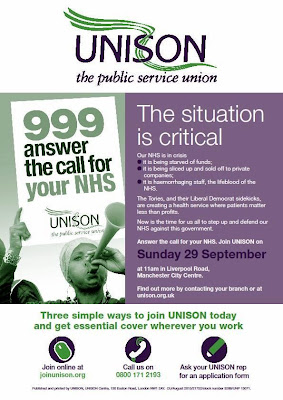 Lobby of the Conservative Party Conference in Manchester
Saturday 29 September

Say No to Austerity
Defend Jobs and Services

Supporters of the National Health Service and all those who want to defend jobs, services and a decent welfare state will be marching in Manchester to deliver a clear message to Conservative Party Conference that we mean to Save Our NHS from cuts and privatisation.

A march and rally have been called by the North West TUC, backed by UNISON, other unions and NHS campaign groups. They'll be assembling at Liverpool Road (M3 4FP) from 11am, and marching to a rally in Whitworth Park.

The protest will highlight the impact of huge job losses and spending cuts across the health service, as well as the rapid sell-off of the most lucrative parts of the NHS to private healthcare companies - many of whom like Circle are also Conservative Party donors.

The event will also raise concerns about the wider effect that government economic policies are having upon communities across the UK.

Coaches to Manchester are being laid on by London branches. Will send details nearer the time.

Good luck to all hope it goes well for all.

Many thanks Robert. Are you going?