Trade union renewal and the role of ideology, organising and servicing. 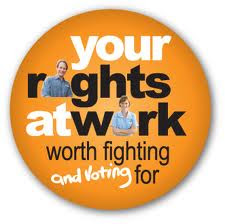 UNISONActive had an interesting post recently "Ideology - an essential component of union growth strategies". It argued that having an organising agenda alone does not work and that unions ought to be more "political". Organising is defined as  "empowering workers at work and in their union".

The American trade union SEIU has a world wide reputation for organising yet this has not resulted in an increase in trade union membership.  Instead this post believes that "Our core message has to address social injustice and the failure of market economies".

I tend to agree but I don't necessarily see any conflict with an union pursuing political goals as well as an organising model except of course that unions don't have unlimited resources so some form of prioritisation has to take place.

Yet the solution offered is to "empower workers with an anti-caplitalist ideology". Which unsurprisingly as a fully paid up mixed economy reformist I don't agree with. We need to control the excesses of capitalism by political regulation, progressive taxation, quality public services and strong free trade unions.

"Ideology" has always been a problem for unions but it is good to debate this issue and hopefully come to a consensus on what we can agree upon for the here and now.

I also think we should also mention in any discussion on trade union renewal the much maligned "servicing" model of trade unionism. I am a huge fan of organising and empowering members and stewards but if members need help at work then they have the right to expect speedy, responsive and competent representation. The best person to represent members on personal or collective issues is a trained, confident local rep who has the support of the membership. But reps need the support of the union and where there is no such local rep the union needs to be there.

Finally, we also need to think that if the Anglo-American school of trade unionism is declining then should we not be looking at those countries in Northern Europe where they seem to be more successful than us with much higher density levels and better protections for workers?
Posted by John Gray at Friday, August 23, 2013