The Strange Death of Private Pensions in Tory Britain 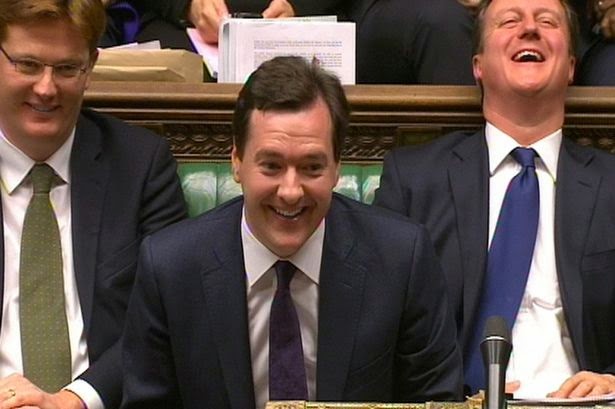 Excellent article below by Michael Johnson on the possible consequences of the budget announcement on annuities. Michael is of course a former advisor to David Cameron but now describes himself as "non political". So I hope he doesn't mind my competely non partisan title and photo in this post :)

A very senior Labour Pension figure described Michael to me as being "100% wrong on Public Pensions and 100% right on Private Pensions".

"Osborne may have sounded the death knell for private pensions"


THERE is a scene in The Italian Job in which the gang is testing how to gain access to the contents of a security van. The resulting explosion destroys the vehicle, prompting Michael Caine to comment, “You were only supposed to blow the bloody doors off!” Similar sentiments could be expressed about the Budget’s consequences for private pensions: it could prompt their demise, although some believe they are already in terminal decline.

The Budget revealed a contradiction in the government’s personal pensions strategy. Pensions minister Steve Webb is pursuing a collectivisation agenda, under his “defined ambition” banner. In particular, this encourages people to pool their longevity risk, which is sensible given that it is cheaper to hedge risk collectively. Annuity books use the same risk pooling principle. But by removing any requirement to buy an annuity from 2015, the Budget has catalysed a collapse in future annuity purchases. Is risk pooling “in” or “out”? One senses a philosophical clash in the corridors of power, between paternalism, liberalism and statism. Perhaps this is a price of coalition politics, but it has potentially significant implications for the future of private pensions.

Essentially, the government seems to have forgotten that annuities are pensions. They are the principal source of the retirement income certainty that most retirees crave. Bad value some may be (QE has a lot to answer for), but ready access to the whole pot at 55 is unlikely to be in everyone’s best interests. The problem is that there are no obvious alternatives, although “self-annuitisation” may catch on. By steadily buying long-dated corporate and government bonds from the age of 50, say, savers could cut out the industry’s regulatory costs and profit margins; larger pensions would result.

That aside, the government has left a void. Or has it? By increasing ISAs’ annual allowance to £15,000, has the chancellor signalled that private pensions are finished, a tacit acceptance of public disenchantment with pensions, distrust of the industry, and the latter’s poor performance? The shift in emphasis towards saving is illustrated by the growing popularity of stocks and shares ISAs (£16.5bn subscribed in 2012-13, up 59 per cent in the last six years), perhaps the last trusted brand in the savings arena. By comparison, individuals’ contributions to personal pensions (including stakeholder) totalled £7.7bn (which includes basic rate tax relief), down 25 per cent over the same period. And as for Generation Y (the under-35s), the word “pension” simply does not resonate.

Politically, encouraging people to provide for retirement through Isas is hugely attractive. It would give the chancellor a unique opportunity to grab a generation’s worth of cashflow, because an Isa’s main tax incentive is in retirement (drawings are tax free), while pensions attract tax relief on contributions, i.e. a generation earlier. Last year, retirement saving incentives cost the Treasury £54bn, more than the combined budgets for Scotland (£28bn), Wales (£15bn) and Northern Ireland (£10bn). In January 2014, the chancellor said that, after the next election, a further £25bn must be cut to help eliminate the deficit. For a cost savings-hungry chancellor, pensions tax relief is now the lowest-hanging, juiciest fruit in Whitehall.

From Labour’s perspective, tax relief’s inequitable distribution is a logical target. It is extraordinary that the top 1 per cent of earners, in least need of financial incentives to save, receive 30 per cent of all tax relief, more than double the total paid to half of the whole working population. This partly explains why the huge annual spend has failed to catalyse the broad-based retirement savings culture that Britain needs. Proposing a more redistributive framework for tax relief would attract widespread support, given that those who would lose out are the 13 per cent of taxpayers who pay higher rate income tax: 87 per cent of workers would in some way benefit.

Meanwhile, the Treasury’s tax relief contributions make it the fund management industry’s largest client. Since 2002, it has injected, through people’s pension pots, £270bn in cash, on which charges and fees are levied. This is akin to a state subsidy of one of the highest paid industries in the world. The industry’s defence of the status quo confirms that it knows that it is a primary beneficiary of the Treasury’s largesse. To misquote Sir Winston Churchill: never was so much taken by so few from so many.

The opportunity to reform retirement saving incentives is potentially attractive to both the political right and left, albeit for different reasons. That notwithstanding, the structure of the UK’s incentives framework faces a fundamental dilemma. Income tax is progressive, so tax relief is inevitably regressive. The net effect is to nullify what is intended to be a progressive tax system.

It is time for a fundamental rethink of how we incentivise retirement saving, particularly given the nudge from the Budget that ISAs are the future. The Centre for Policy Studies will soon publish some proposals for a way forward, which includes sweeping away today’s tax relief framework.

Michael Johnson is a research fellow at the Centre for Policy Studies".
Posted by John Gray at Saturday, April 12, 2014