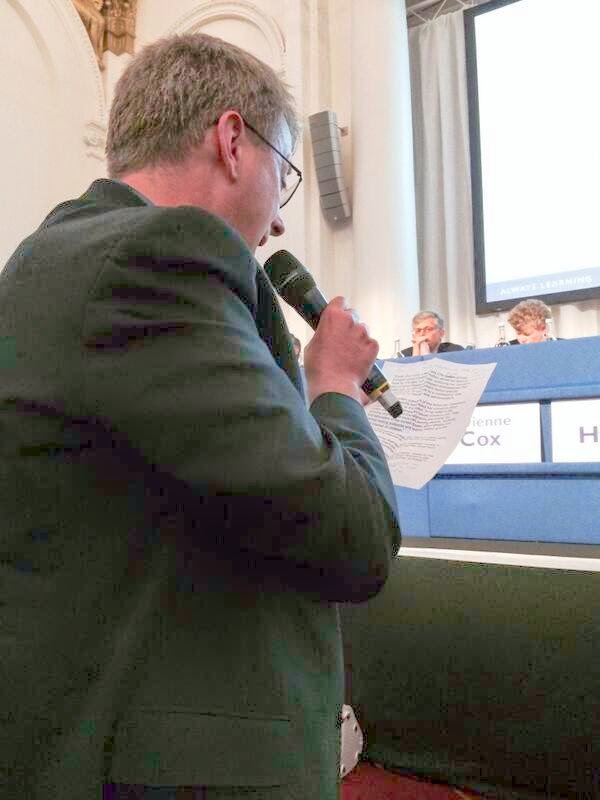 I was there as a UNISON staff pension fund trustee and share owner representative. This is the question that I asked the Pearson Chair and the Board.

"Earlier this month, a New York City City school principal named Elizabeth Phillips wrote an opinion piece for "The New York Times", outlining her concerns about a recent Pearson-developed standardized test. Phillips was not able to comment about specific deficiencies with the test, due to a contractual “gag order” imposed on teachers and administrators.

Randi Weingarten, president of the American Federation of Teachers, recently addressed her concerns about these “gag orders” to the board. In her letter, President Weingarten raises concerns that “Gag orders and the lack of transparency are fueling the growing distrust and backlash among parents, students and educators in the United States about whether the current testing protocols and testing fixation is in the best interest of children.” President Weingarten asked that Pearson cease using these prohibitive clauses in their testing contracts.

QUESTIONs: Given that the North American market is Pearson's largest, don't you think that this could harm our companies performance?

Will the board respond to accusations, raised by the American Federation of Teachers, about Pearson's use of “gag orders” in their standardized testing contracts"?

In response, the Chief Executive John Fallon seemed to suggest that Pearson was not to blame for the "gag orders". I had with me two guests from the American Federation of Teachers, Bradford Murray and Dan Pedrotty. They certainly did not seem to agree with his analysis, however they were reassured by his firm commitment to engage with the American Teaching unions on this matter (and on other issues with the British unions). I know after the AGM there was a constructive discussion with Bradford and the CEO.  Further meetings are planned.

Many thanks to our UNISON Capital stewardship maestro Colin Meech and our Staff pension fund administration team for sorting out all the AGM entry arrangements.
Posted by John Gray at Tuesday, April 29, 2014