Workers' Memorial Day (and stop the Slaughter in Qatar) 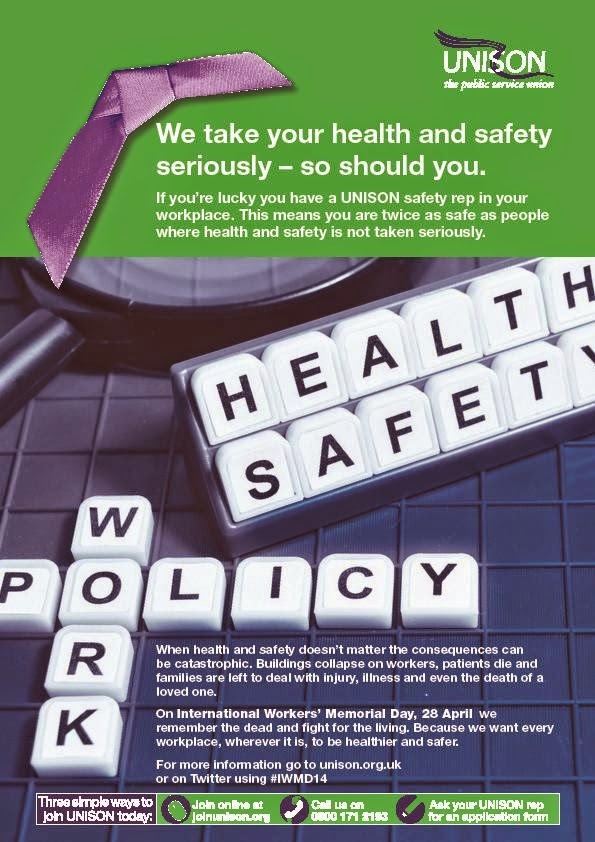 Every year on the 28 April it is International Workers' Memorial Day (WMD). A trade union led day of remembrance for those killed at work or who have died of industrial injuries or diseases. Some 50,000 British workers still die every year prematurely due to their work.

It is also a campaigning day for those currently in work and to try and ensure they are safe. I will be wearing my WMD purple 'forget-me-not' ribbon and hope to attend an event later today.

The WMD theme this year is 'Protecting workers around the world through strong regulation, enforcement and union rights'.   I would suggest that you ask all political candidates in the forthcoming Council and European elections - are they in favour of this theme? Then vote accordingly.

Last week marked the 1st anniversary of the disaster at Rana Plaza Factory in Bangladesh which killed over 1100 workers. Remember also the estimated 400 workers dead so far in Qatar building the football stadiums for the 2022 World Cup. At the present rate 4000 workers will be dead by then.

While construction deaths in this country are still at a unacceptable level, thanks to regulation and trade unions, not a single worker died in the UK during the building of the 2012 Olympics.
Posted by John Gray at Monday, April 28, 2014