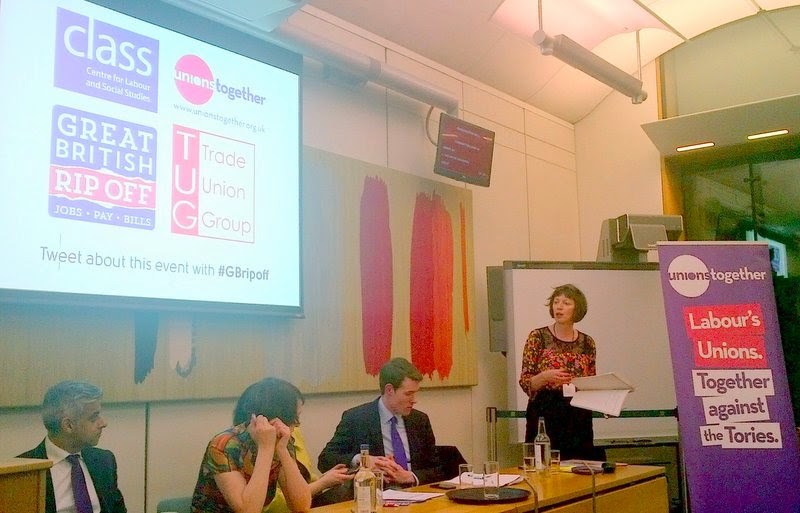 Last month I went to the "Great British Rip Off" debate at the House of Commons. Sponsored by "Unions Together"; "Class" and the Parliamentary "Trade Union Group".

The excellent Katy Clark MP, from Trade Union Group of MPs Chaired (apologies for not getting her into picture!).


Zoe Williams from the Guardian was the first to speak (2nd left - another useless photo by me). She thought tonight that she was speaking to the converted on why inequality is "bad" but she doesn't understand why the Tories don't get that despite the economy picking up on GDP, inequality is still growing? Wages have not gone up since 2003.

There is 500k "self employed" who are not really employed but playing the benefit system and then another 500k on insecure "0 hour" contracts, then 150k on unpaid placements.  People are not being paid enough. They cannot buy enough. There is not enough demand and ideology is hamstringing the economy.

Tories would rather have a weak economy than free collective bargaining,


Even a living wage for all will not solve housing crisis. Housing is not affordable even on a high wage. So many cannot afford housing then something radical may actually happen. Solution is collective bargaining, land tax and collective housing provision.

Next was Sadiq Khan MP who agreed that we have seen a Great British Rip off in recent years. The most wealthy have increased their wealth while the poorest have become even poorer. 28% of Londoners live in poverty despite 60% of them being in work.

In his constituency of Tooting he has many houses worth £1 million plus but it also has food banks.The last Labour government spent money on improving the housing stock but did not spend enough on building new homes. A future Labour government will build 200,000 new homes per year by the end of its term.

Matthew Pennycook, the Prospective Parliamentary candidate for Greenwich and Woolwich was next. He reminded us that for the first time, the majority of people in poverty were in work. Since the election the average family is worse off by £1600 per year. Stagnant wages have caused a massive cost of living crisis.

A living wage is part of the solution but not the silver bullet. We also need affordable child care and (real) affordable rents.

Final speaker was the General Secretary of the TUC, Frances O'Grady.

Frances asked for not a plaster but to address the root cause of poverty. Which is giving Billions to subsidise poverty wages to employers who can afford to pay more. We need a fair share of wealth in this country and a right to bargain. We need wage councils or "Fair Pay" councils (whatever you want to call it) who can work on the whole pay package.

We need a new economy, a  fair economy and in tribute to the RMT trade union leader, Bob Crow who died recently, we need greater public ownership.

Frances finished by quoting Docker trade union leader (and former Newham Labour Councillor) Vic Turner, who when asked what trade unionism is all about answered "its about working class people looking after each other".

(usual disclaimer about the absolute accuracy of my hurried note-taking)

If you don't have rich people, then how can they start businesses or invest?

It is not like trade unions invest in new start-ups.

Inequality grew under labour, because you wanted more people to vote for Labour.

Labour had a fake economic boom, based on house inflation and credit card consumer spending.

I don't think many "rich people" actually start businesses? This tends to be people who want to make money. I also don't think any of the speakers actually said said get rid of all rich people either?

Inequality did increase under the last Labour government because it was not sufficiently "left" enough and believed that an unregulated market could painlessly deliver the taxes to build new schools and hospitals.

While we do not want to repeat the silliness of the 1970's I hope and expect it will not make the same mistake again.