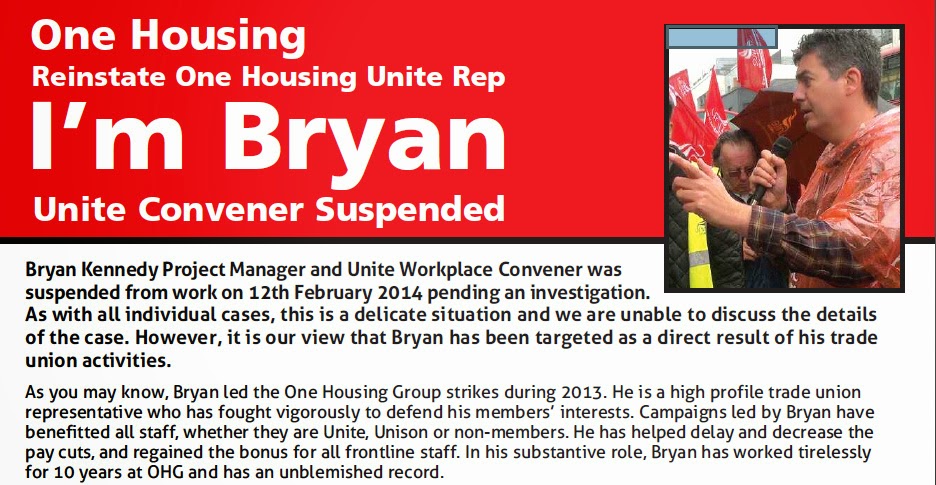 This Wednesday 23rd April 12.30-1.30pm there will be a protest outside the gross misconduct discipline hearing of suspended Unite convenor, Bryan Kennedy.

This will take place at the One Housing Group Head Office, 100 Chalk Farm Rd, NW1 8EH (next to the Camden Roundhouse).

I can't be there on Wednesday since I have to represent a trade union member out of London that day. I hope that Housing Association (and other) trade unionists will attend to support Bryan.

Bryan is a top trade unionist and also a dedicated housing worker and anyone who has ever met him would be astonished that any employer is thinking of sacking him. To be clear, Bryan is an intelligent, pragmatic, softly spoken, reasonable and consensus seeking trade unionist who wants to protect and defend his members and is willing if necessary to take on his employer to do so.

He is facing a hearing on Wednesday where he could lose his job which his employer is saying has nothing to do with his trade union activities such as when he led his members on 11 days of strike action last year.

Hmmm. While I don't know all the details about the allegations against Bryan I think they are rubbish. You see, One Housing Group has form on these issues.

I remember speaking at a protest meeting in 2009 against the sacking by One Housing Group of its UNISON convener Debbie Cordroy. At this meeting we had local residents, Labour Jim Fitzpatrick MP, Tory Councillor Tim Archer, Former Labour Councillor (and Barrister) Martin Young, UNISON NEC member John McDermott and myself all speaking in favour of Debbie.

I understand that exactly the same discipline panel that dismissed Debbie Cordrey will be hearing the case against Bryan on Wednesday.

This just stinks. I have come across senior managers who boast that due to lack of regulation and accountability they can do practically anything they like and there is nothing anyone can do about it.

I am in the main a supporter of Housing Associations but genuinely think that due to the lack of probity and democratic governance in many parts of the sector, it is setting the seeds of its destruction. I am constantly surprised how vehemently disliked and mistrusted the sector is amongst a very wide spectrum of our society.

It is seen by many as an undemocratic and unaccountable oligarchy enriching its senior management team and Board at the expense of residents and workers, feeding off decades of huge public capital grants and benefit subsidy by taxpayers.

Politicians are also acutely aware of its massive assets base which they think could be better managed.

We use to talk about the press in this country "drinking in the last chance saloon". I think the same applies to the housing association sector and unless it significantly changes it ways then I honestly don't think it has a long term future as independent self run organisations.

One Housing Group could signal that there could be a change by not acting in a nasty, vindictive, and corporatist manner on Wednesday.  This would be a start.
Posted by John Gray at Tuesday, April 22, 2014

sorry but silly and cowardly sectarian anonymous comments by Tory apologists will not be published.