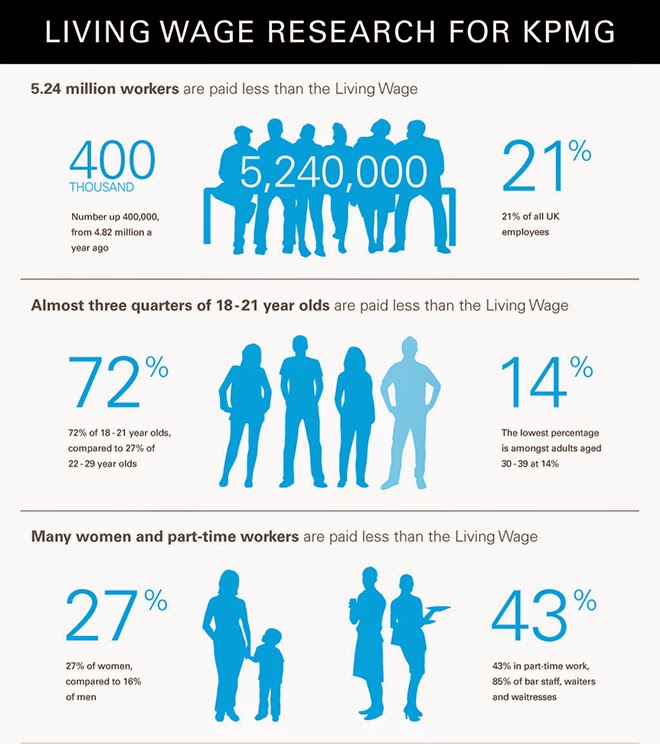 "At KPMG, we believe that paying people a decent wage is the right way forward for responsible business. Indeed, we’ve ensured for more than 8 years now that all employees and contractor staff working out of our buildings are paid a Living Wage. Regrettably though this is far from universal in our economy. Our recent research suggests that there has been a substantial increase in the number being paid less than the Living Wage, which now stands at 5.2m people.

Disappointing though this may be, it can be tackled.  That’s why KPMG has helped establish the Living Wage Foundation, whose kite-mark is fast becoming recognised by forward thinking employers. It is great to see that the TUC is one of those organisations. There are now well over 600 accredited organisations but I look forward to the time when this is 60,000.

There is, after all, a responsibility on all of us to recognise and applaud organisations doing the right thing, as often the easiest course of action is to avoid making a choice at all.

But it’s not just about “being nice”, offering a Living Wage makes sense for business because, to have an efficient and effective operation, firms require staff who are motivated, rewarded and incentivised to go that extra mile in servicing customer needs. By way of example, since introducing the Living Wage, KPMG has seen a significant increase in the motivation and loyalty within on-site supplier staff over the last few years.

We also found that staff turnover has more than halved, staff require less supervision and have also been trained to perform other activities which provide a more stimulating working day. There has been a marked improvement in the quality of service: our help desk gets far fewer complaints. And – perhaps the strongest business case for paying the living wage – there has been increased productivity, as attitudes are more flexible and positive. Staff are willing to give it that bit extra in terms of exceeding our external and internal clients’ expectations.

KPMG is proud to be a leader in paying all our staff the Living Wage, directly employed or contracted. This is one of the key components of our sustainable procurement programme, forming one of three core “pillars” of carbon, supplier diversity and the Living Wage.

In my view it is important to be clear this isn’t about whether services are outsourced or run in-house. Organisations outsource because the service is not within their core skill set. The organisation that outsources sets the parameters around which the contract arrangements are agreed. I am seeing for instance, suppliers increasingly interested in Living Wage recognition; this requires them pay it to all the people working on their own business premises e.g. cleaning, catering and admin staff etc, and they also commit to submit a Living Wage compliant bid alongside the regular bid.

The fact is that, increasingly, Living Wage accreditation and recognition differentiates decent organisations in the market place, from those with different values. Paying the Living Wage is not altruism but a sensible commercial position regarding the benefits of staff retention and productivity. So much evidence now exists to suggest that suppliers have found contract retention levels are higher, due to the improved level of customer service. As we come out of recession, customers will have higher expectations about receiving a quality product and service, which in turn requires a stable and motivated workforce. It is hard to see how this can be achieved whilst not paying a Living Wage.

In summary, paying the Living Wage makes sense – as it benefits workers, their families, communities, and also the businesses for which they work. Although it might not be appropriate for every business, KPMG encourages our contractors and suppliers to follow suit and every employer to consider whether they can make the change to pay the Living Wage. For us, the last eight years have been an exciting journey with the Living Wage changing from being an initiative that was not really understood by business to one that good employers wish to embrace".