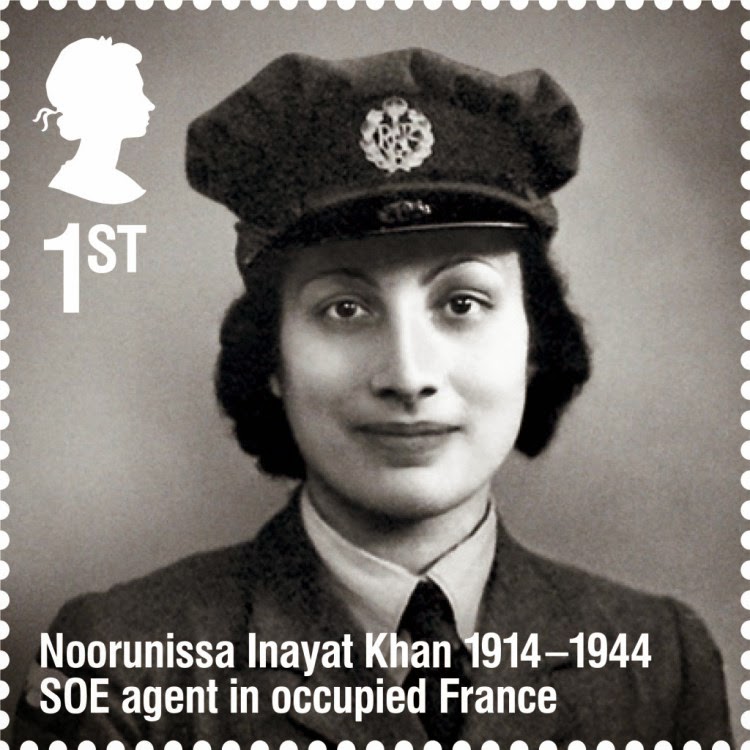 The Royal Mail have issued a new set of first class stamps on 10 "Remarkable Lives" who were born in 1914.

Noorunissa Lanayat Khan "The British-Indian secret agent, who served during World War Two, was dubbed the "Spy Princess". She was imprisoned, tortured and eventually shot after being sent into occupied France to help the resistance".

Noor was a descendent of Tipu Sultan, King of Mysore, one of the most dangerous opponents of British rule in India and like him a supporter of Indian Independence.

Despite being brought up as a pacifist, while training as a nurse in the second world war she felt that she was not doing enough "to fight the evil of Nazi" and joined the British forces.

She volunteered for the Special Operations Executive (SOE) and was sent to occupied France to help the Resistance fight the Nazi.  She is captured by the Germans and sent to the concentration camp at Dachau where she was murdered with 3 other female SOE agents. Her last words before being shot was "Liberte" - "Freedom!"

Update: fascinating comments on Facebook on this post from one of our top UNISON stewards whose Mum served with "Norah" before she left for the SOE.  They possibly trained as radio operators together. Her Mum later went on to win a "Mention in Dispatches" for her work during D Day.
Posted by John Gray at Monday, March 31, 2014