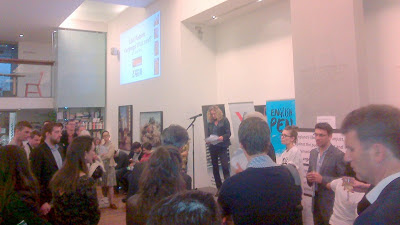 Last Wednesday evening I was invited to take part in an event organised by the Libel Reform campaigners to celebrate the Defamation Act which received Royal Assent in April.

This Act has been achieved very much against the odds and is a real victory for free speech, reasoned argument and citizen power.

It has still not been "enacted" and there are concerns that much of the detail on regulations and procedures have not been clarified. Also Northern Ireland needs to ensure that citizens have the same protection as elsewhere. But the Libel Reform campaign has been incredibly successful in such a short period of time (2009). There is still more to do of course.

I met my old blogging mucker, fellow Labour Party loyalist and Libel Survivor Dave Osler in the Betsey Trotwood Pub beforehand. At the event (next door at the Free Word Centre in Farringdon, London) itself we met up with Alex Hilton (see photo right) and Libel freedom fighters David Allen Green,  Robert Dougans and Nick Cohen.

After the event we retired back to the Betsey to continue putting our world to rights. Interestingly, Dave Osler is going to provide me with evidence that Trotsky was actually all the long a mixed economy reformist - just like me :)

(sorry picture is a little flat but surprisingly cannot find anything better on internet to pinch)
Posted by John Gray at Sunday, June 16, 2013

Don't believe him until he produce descendants of surviving kulaks - several million such people would be required.